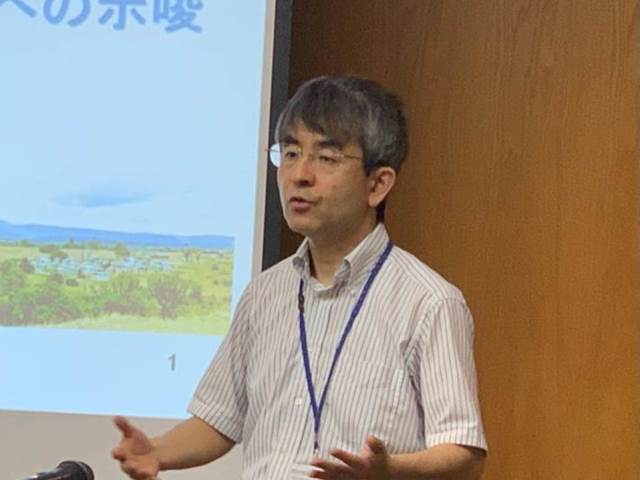 [SUMMARY OF PRESENTATION]
The Land Reform in South Africa pertains to the history of a substantial inter-rational disparity of the landownership, resulting from where the white population came into the ownership of 87% of land based on the Native Land Act of 1913. The Land Reform issue was one of the greatest focus for the system transition negotiation between the National Party (“NP”) Government and the African National Congress (“ANC”), which began based on the ending of the Apartheid in 1991 and has taken a complex course of development for a period of more than 20 years thereafter. According to ANC’s campaign pledge of 1994, a promise was made that one third of the farm land would be transferred to the black population within 5 years, but, as referred to in the speech of President Zuma of 2017, under the present circumstance, “only 9% of the farm land was transferred”. In this situation, President Zuma also stated in the same speech, “the Land Reform will be accelerated, and as necessary, land will be compulsory expropriated from the white population”. Thus, the Land Reform issue has continued to be the focus of the South African politics.

While Mr. Shiga commented that the delayed situation with the Land Reform is symbolic of today’s difficulty in resolving the disparity in South Africa, he suggested that it is worth paying attention to that the difficult negotiation surrounding the Land Reform have peacefully reached a compromise without causing any armed disputes. Further, such compromise was enabled, where it made possible for the white and black populations to “co-habit but live in different worlds” by keeping the system intentionally ambiguous, the details for the system design were deferred to a later time and stage based on negotiation strategies of both of the parties, and Mr. Shiga referred to that such negotiation methods and techniques may greatly inspire peacebuilding as well as the system transition.

For the Land Reform in South Africa, a method of “Market-led Land Reform” that was proposed by the World Bank was selected, and the land re-distribution was based on the so-called system “Willing Seller-Willing Buyer”. ANC understood that this system is a disadvantage system for the black population with less resources, but ANC accepted this system to avoid a breakdown of the negotiation. In response to the compromise made by ANC, NP also has given in, and this resulted that the Land Reform system constituted a layer of building up of compromises from both of ANC and NP. Such mutual compromise was enabled by the system adhered to the principle of constructive ambiguities. Accordingly, as represented in the constitutional provision containing both of the guarantee of property right and the land compulsory expropriation, NP and ANC intentionally made the legal system ambiguous, deferred details of the system to be determined by the experts, and developed the system in a manner of allowing both of the white and black populations to cohabit with different optimistic expectations. This way, they prevented the escalation of political confrontations. Such “Technique for Compromise Building” played an important role in successfully reaching the agreement for the negotiation surrounding the system design for the Land Reform in South Africa.

[Summary for Panel Discussions and Q&A]
During the panel discussions, the participants mainly discussed as follows.

Based on the above comments, Mr. Shiga responded as follows. 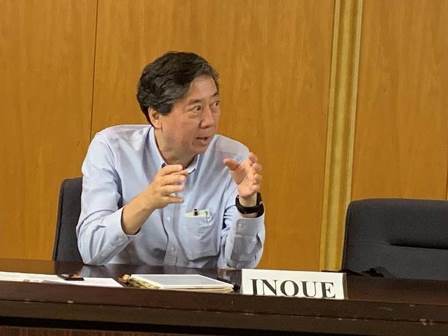 GPAJ Member Ken Inoue commented as follows. Land issues in South Africa resembles and have common points for the territory issues of Japan, as major obstacles are basically deferred with ambiguities in order to avoid the break-down of the negotiation. This method may potentially be an effective method for the period with strong tension between groups, even if the problems are deferred, it does not mean that the problems get solved. Ultimately, I wonder that de facto owners continue to retain the existing rights for a long time. If any resolution method through force cannot be taken, it may be necessary to cause the white population to voluntarily abandon the land by giving economic incentives or negative incentives. In more detail, measures as exemplified may be that the government can pay out attractive compensation or implement taxes to the extent of land-owners’ grave burdens in case of holding onto the land.

GPAJ Member Yuta Moriguchi commented as follows. Assuming a comment made by another member, “South African people have more interests in the labor problems than land problems,” is correct, the Land Reform for South Africa may have a stronger angle of clearing the negative emotions (primarily, those of non-white population) with the land problem representing the negative history.

Mr. Masakuni Tanimoto, Secretary-General of GPAJ, noted that one of the neighboring countries, Zimbabwe, pursued an aggressive land reform policy which led to the collapse of its economy. Tanimoto believed that the withdrawal of foreign capital was the main reason although the black population`s lack of know-how had been mentioned as the cause. If they adopted policy of voluntary WSWB and the redistribution programs, they should enable commercial transaction of land with security guarantee by introducing bonds or policy finance to make conditions for the purchase and selling of land. This will also enable the introduction of private funds. Use investment funds and agricultural cooperatives rather than individuals would accelerate the transfer of land ownership to the black populations. Otherwise black peoples who is having poverty problems cannot afford to purchase land.

At the conclusion, GPAJ President Sukehiro Hasegawa stated that he had learned a lot from Mr. Hiroaki Shiga`s insightful presentation and the incisive comments made by knowledgeable commentators and participants. Mr. Hasegawa then added his two points. First, it was significant that the sanctification of land ownership advocated by the British political philosopher John Lock had been replaced by the notion of “Pursuit of Happiness” as the third inalienable rights after “Life and Liberty” in the United States Constitution. In that sense, the “Constructive Ambiguity” policy that successive South African governments have adopted had an effect of preventing the intensification of racial confrontation and maintaining peace, although it allowed the continuation of the current land ownership. It can be considered as a prudent approach. Second, political leaders tend to incite people by pointing out issues such as land reform as unjust. President Cyril Ramaphosa has dealt with the land issues carefully during his first term. Whether he could continue to exercise self-control and not to abuse the issue would have a decisive effect on sustaining peace in South Africa. 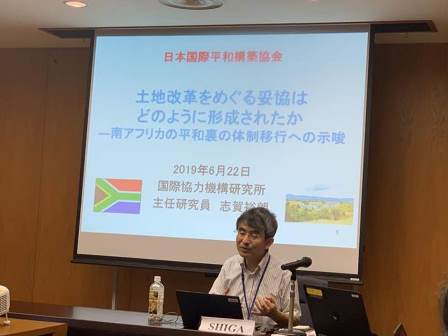