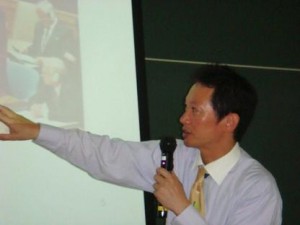 １．Japan’s National Security Policy
A）Self Defense Forces is the basics for our national security. There are two principles, first one is “Exclusively defense”, which is from the experience of WWⅡ and based on our national Constitution. Second is “Defense capability”, Japanese Self Defense Forces doesn’t allow to have any capability of attacking other countries or conducting any war or attack, and should have basic defense capability without attack.
B)Japan-US Security structure…US nuclear capability is useful for security of not only Japan, also North-east Asia and South-east Asia. US presents in Japan is important.
C)There’re four parts of commitment to international community. Firstly Bilateral Diplomacy with neighboring countries. It’s important to have smooth relationship and keeping good atmosphere. Secondly Multilateral Dialog. In order to maintain security environment, Japan should establish or maintain multilateral dialog. Some people say that the ARF (ASEAN Regional Forum) still is a talk show, but the members are considering step up seriously. For example, expanding cooperation for counter terrorism or piracy. Thirdly, Arms Control of Non-governmental organization. Japan participates in treaty conference held in the US. Mr. Okada (Foreign ministry) is trying to promote nuclear disarmament and make the world free from the nuclear weapons. Fourthly Contribution to International Peace building. It is necessary since now in a global era, if something happen in other countries, maybe it will effect upon Japan.

2.Japan Policy on Peace building
A)What is Peace building
Peacebuilding = Consolidation of Peace + Nation building
There are three factors in Consolidation of Peace; promotion of peace process, humanitarian and reconstruction assistance (recovery of people’s peaceful life), security and stability.
There are three parts of current Nation building. Firstly, establish the political structure (governance), because there are no effective government and parliament, reliable constitution and political structure in a lot of countries just after the conflict. Secondly establish the economic structure, because they need to establish market system and create new jobs. Thirdly, establish the social structure, because people have to fight against hostility and discrimination for maintain peace.
B)Three pillars of Japan’s peacebuilding
①On the ground: contribution to UN PKO (Peace Keeping Operation) and multilateral forces as the international peace cooperation. Expand the priority issues in the ODA charter, to improve various means and systems, to implement flexibly and efficiency
Japanese government sent Self Defense Forces to Haiti, Golan, Nepal, Sudan as PKO, and sent it to the Somalian coast and Eden as antipiracy operation. Japanese civilians also work for peacebuilding mission, but the number is very small. Japan is the second largest financial contributor to the UN’s peace keeping operation but a fifty-first contributor to sending people for peace keeping operation.
By the ODA (Official Development Assistant), Japan is putting money into Humanitarian and reconstruction assistance, Assistance in security sector (DDR, DIAG, police, collection of small arms and light weapons, land mine removal, etc). Japanese government also sends technical experts by using ODA.
Japanese government starts Non-ODA which supports peacekeeping operation since ODA Charter doesn’t allow using ODA for area closely related with military activities.
②Intellectual contribution: Human security respect for local ownership than traditional development. Japan is on the tenth time as the non-permanent member of UN Security Council, and the leading country for Timor-Leste. Japan is also the Chair of SC PKO working group from 2005-06, 2009-now. Japan leads the discussion about the gap between mission mandates and implementation and enriches the discussion on enhancement of cooperation.
③Human resource development: HRD program in Asia for peacebuilding, delivering lectures in PKO training centers in Egypt, Ghana and Mali, and assistance to PKO centers in Africa and Malaysia.
HRD program was founded to make use of Asian experiences and expertise for pecebuilding around the world. They launched the “Senior Specialist Course” and the “Seminar on peacebuilding”, and set up database for peacebuilding human resources.

3.United Nations Security Council Reform
The reason of Reform: SC is most important organ in the UN because it has the responsibility for international society. But the UN members have increased form 51 (1945) to 192 (2010). Expansion of its activities and necessity to cope with new threats need to increase confidence in the council and its effectiveness.
Expansion of permanent membership is to appropriately reflect the present international society, to assure commitment of members with necessary capabilities and will. SC Reform is a difficult but necessary task. Common understanding on necessity, but they have different backgrounds and interests, which reaches impasse. P5 countries want to maintain their existing interest, great rivalry especially between neighbors. For example, Japan wants to be permanent member but Korea strongly doesn’t want Japan to be.

B : 自民党と民主党で平和構築の政策において大きな違いはありますか。
平和構築で資金面以外の行動をするにあたって憲法改正が必要ではないでしょうか。
世界の問題や平和構築に関心のない日本人に対してどう啓蒙していくべきでしょうか。
→ There are no major difference regarding peacebuilding, but there’re some kinds of difference. For example, former government LDP decided to send Self-Defense Forces to Indian Ocean.
There is a consensus with amendment article nine but it depends on the argument of Japanese people. I believe that even under the present article nine, Japan can contribute for peacebuiding. Important thing is the minds.
Political leaders have to make people know what’s going on in the different parts of the world, and what Japanese governments are doing.