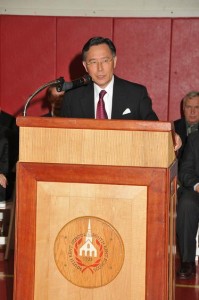 Professor Hasegawa delivered a graduation prize day memorial speech entitled “New Leadership in a Globalizing World” on 30 May at the South Kent School in Connecticut, USA before graduating students and their parents and friends. Also in attendance were Chairman Rosenburg of the Board of Trustees, Headmaster Andrew Vadnais and other faculty memebers. The text of Professor Hasegawa`s speech is shown below.

“New Leadership in a Globalizing World”

Good morning also to the members of the Board of Trustees, the faculty, family and friends of the class of 2010. Congratulations on your graduation, and thank you for allowing me the honor of being a part of this memorable occasion.

It’s wonderful to be back on this beautiful campus on the hill side. It brings back happy memories of my own graduation ceremony held for the class of 1962 almost 50 years ago.

When I came to South Kent, I hardly spoke English, and my daughter, Erika, who is here today with us, thinks I still don`t speak it properly. I guess it is almost impossible for Japanese, and even Koreans and Chinese to master the English language just as it is challenging for an American to speak and write an oriental language perfectly. But, what I learned at South Kent then and later in universities I studied in America, Europe and Japan is that the directness of purpose and focus of our attention do make a difference in not only achieving goals we set for ourselves but also in helping others improve their chance of being educated and leading their societies or institutions they belong.

So, today, I would like to share with you three attributes of leadership that I have seen play a decisive role in two countries and in the rapidly globalizing world.

The first attribute is the spirit of self-reliance that I found in a gradually emerging Africa. Africa is a continent that still remains behind in economic and social indicators of progress such as per capita income, literacy and health, and many African countries are seen as riddled with conflict and poverty. Yet, I see the situation is changing. As the resident representative of the UN agencies, I spend nearly two years in Rwanda immediately after the genocide that left nearly one million people dead as the ethnic conflict erupted in mass killings in 1994. Sociologists identified the colonial policy of divide and rule as the main cause of this atrocity. While many Africans blamed the colonial rule, Paul Kagame, who was the key leader of the new Government and now the President of Rwanda, agreed with me that it would not solve the problem of hatred and division by just blaming the colonialists. Instead, he took the challenge of changing the mentality and mindset of people that they are masters of their own destiny. Therefore, they must be responsible to themselves. He recognized the spirit of self-reliance and discipline that are required of them to stop hating each other and destroying their country. As I was leaving the country in 1996, I challenged him to show to the entire world that he and his people could rebuild their country free of ignorance and conflict. Today, Rwanda is known as one of the most progressive countries in Africa. More than one million Rwandans who had fled to Europe and North America have returned to their country and embarked upon the process of rebuilding their nation. It`s a small but a tangible success story not known much in the international community. Please do not underestimate the potential of Africa, as Asia was described as a place of helpless soft states fifty years ago by Swedish economic Gunnar Myrdal in his well known treatise on the Asian Drama: An Inquiry into the Poverty of Nations.

Another country in which I spent five years as the UN representative is the tiny country of East Timor, born out of 24 years of Indonesian military occupation. The Timorese leaders, most notably Xanana Gusmāo and José Ramos-Horta, with whom I formed the bond of friendship, are convinced that the future is more important than the past. Instead of accusing the Indonesian military for having killed an estimated 200,000 people, they are concentrating their energies and the majority of funds generated from petroleum resources to improve education and health care, and to re-establish the relationship of friendship and cooperation with the neighboring countries including Indonesia. They themselves lead a simple life and spend much of their time with people in local communities.

These leaders of Rwanda and Timor-Leste reminded me of teachers who cared for me at South Kent particularly then Headmaster Wister, history teacher Charles Whitmore, math teacher Noble Richards and English teacher Arthur Smith. They helped me a lot, while making it clear that I had to set my own goals and focus my energies to achieve them. Acquiring a sufficient level of English language proficiency was my main goal at South Kent. I am glad that I pursued it as English has become the common international language of communication. As I traveled to New York City to the United Nations headquarters to job hunt for the first time, I was then told that it was necessary for me to have a second language out of five working languages of French, Spanish, Arabic, Chinese and Russian. I felt it was unfair to insist on this second language requirement, but I took up the challenge of learning French as it was sin qua non for achieving my goal of entering the UN organization. Two years later, they welcomed me as “Japonais qui parles tres bien Francais.” Japanese who speaks English well)

Since then I spent nearly 40 years with the UN, half of it in New York and Geneva, and the remaining half in five countries of Nepal, Indonesia, Western Samoa, Somalia, Rwanda and East Timor. What I learned in these countries is the diversity of values and at the same time the continued importance of passion and commitment to peace and the welfare of other people. In this regard, I wish to pay tribute to my friends and colleagues, Mr. Sergio Vieira de Mello and Mr. Hedi Annabi, both of whom were heads of UN peacekeeping missions and many other UN staff, who died in the Canal Hotel bombing in Iraq in 2003 and the earthquake in Haiti in January this year. They made ultimate sacrifice in the cause of peace.

Finally, I would like to point out the importance of respect we should hold towards each other. Independence is of higher in value than dependence. Yet, we are becoming more and more interdependent in this rapidly globalizing world. Interdependence requires mutual understanding and appreciation of one other.

The three principles of South Kent School: simplicity in life, directness of purpose and self-reliance, became part of me as they were practiced and shown to me by faculty and staff of South Kent, while they held their respect towards me as someone coming from a different cultural and social background.

One of the faculty members, Arthur Smith and his wife, Maggie Smith, in particular lived a simple life and spent an enormous amount of time and effort in helping me learn English and become self-reliant. I felt loved. People learn and grow more when they know they are cared for.

You can become the new leaders of the globalizing world if you focus your attention and efforts during the next four or six years, by learning the necessary academic disciplines and contributing to a better and peaceful world. The world will be more peaceful if you as a leader can take up the challenge of giving opportunities to others to develop their potential as human beings with the same care and attention that you have received at South Kent.

In conclusion, we should continue to study and acquire as much knowledge as possible and, as Aristotle says, to realize how little we know. Knowledge is powerful as “the pen is mightier than the sword.” Yet, we should know that “imagination is more powerful than knowledge.” As the Bible and a Chinese proverb say, “Give a man a fish and you feed him for a day. Teach a man to fish and you feed him for lifetime.” We now must add to this, the need not only to fish but to conserve fish lest no fish left on earth. As Albert Einstein says, “the problems that exist in the world today cannot be solved at the same level of thinking that created them.” New leaders need to rise to a higher level of thinking and exercise more imagination to deal with newly emerging problems in this rapidly globalizing world. For this, I am pleased to note that the South Kent School is moving in a right direction. To the class of 2010, I wish you all the best in pursuit of your further studies and preparation as new leaders of the global society.