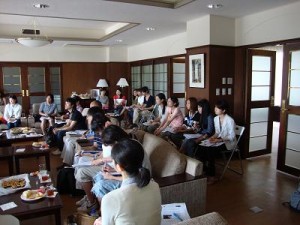 Another group received briefings from local NGOs such as KnK, Share, and Ba Futuru. KnK supported informal educations in 4 districts in Timor-leste. SHARE (Services for the Health in Asian& African Regions) was providing assistance to popularize the primary health care. Ba Futuru (which means in English, “For the future” ) aimed at transforming mistrust and violence into peace and self-directed growth by supporting people in Timor-leste. Remarkably, all of speakers were women. The study tour participants recognized women’s power and their needs in developing country indeed. (Yuho Nakagawa）