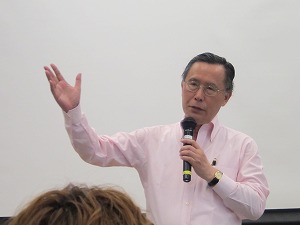 ＊＊＊＊＊＊＊＊＊＊＊＊＊＊＊＊＊＊＊＊＊＊＊＊＊＊＊＊＊＊＊＊＊＊＊＊＊＊＊＊＊＊＊
＜Ⅰ．講義概要＞
1.New Global Threats
Kofi Annan, the secretary-general of United Nations, has established the high level panel of experts to come and find out what is the newly emerging issue that confronting the world. They identify several new threats and challenges. There are nuclear, radiological, chemical and biological weapons. However, they did not emphasize on the danger of peaceful development of nuclear energy. Probably they somehow thought that Chernobyl nuclear incident that took place in 1986 was an isolated case. However, what happened in Chernobyl happened in Fukushima too. Nuclear energy problem is a big problem not only Fukushima of Japan. It is a global issue. We have interstate conflicts, intrastate conflicts and genocides. Human being has a capacity of hate as much as for love. And most powerful force of action according to psychologist is not desire but it is fear. So we have always remember, this also impact on the conduct of international relations. United Nations decided to establish international criminal court, ICC in 1998. ICC was created to bring about more justly world and punish the bad leaders who commit genocide, war crime and crimes against humanities. We also have continued problem of not just poverty but in the equality. The poverty alone does not create the conflict. An economic difference brings about a conflict. So ODA is necessary. We have a transnational organize crimes. So we have to looking to the economic globalization, particularly neighbor movement and impact of population dynamics.

2. The Purpose of Global Governance.
(1)It is to regulate the excess of Westphalian acts and globalization process. It is to think global governance is made to address. Westphalian acts meaning is acts and behavior of nation states. There is no authority to regulate conducts of individual nation stats.
(2)Guard dignity and self-determination of people.
This is as first emancipated by the president Woodrow Wilson in 1917 in his 14 points.
(3)Realize more equitable and sustainable growth.
The catchword is sustainability.
(4)Maintain freedom and the rule of law.
It is not the rule by individuals.
(5)Balance national and human security.
People are important. National and human security, the concept emerge new paradigm.
(6)Maintain accountability of politician and business leaders.
The government and government leaders have to account to the people what they do. If you go to developing countries, nobody questions Prime Minister.

3. What is Global Governance.
(1) The textbook p.38 says “A post-Westphalian world border is in the making as sovereign statehood is transformed by the dynamics of globalization. A conceptual shift from geopolitics to global politics.” So what does that mean? Baylis and Smith says that is a transition pace from Westphalian. Until Thirty Years’ War, it was dominated by Roman Catholic empire. All these races are ruled by kings and other groups. So people in this era stood up and said “No. It’s us who were going to decide. That is the beginning of the concept of nation state. Westphalian treaty was signed in 1648, saying it’s a community that has its own sovereignty. It’s very important for you to understand the concept of sovereignty. It’s sovereignty rests with people. Until World War 2, in Japan sovereignty rested with emperor. Now if you go to Australia, sovereignty has been of England but it’s a nominal. Sovereignty is the supreme power.
(2)”Global Governance is not the same as world government…two other essential elements: Networks among agents, and norm – standard of expected behavior. Examples of formal global governance are such international organizations as WTO, IMF and emerging ICC.” So they say global governance is not same as global government. What is the difference between the global governance and the global government? We have not reached or established global government as we have Japanese government. Yet global governance is now in the making because we have networks of agents and also networks of norms and standards. What are the norms and standards? The standards can be indicative physically but norms are not physically visible. Norms is code of conduct. Norms are developed to soft law. We have standards.
(3) Let us look at also what global governance means. It’s significance. “Global Governance includes formal… as well as informal arrangements that people and institutions have agreed to, or perceive to be in their interest.” This is in Commission on Global Governance in 1995. They tried to establish definition of global governance.
(4) “Global Governance is a continuing process through which conflicting or diverse interests may be accommodated and cooperative actions may be taken on global scale.”
(5) Global governance involves ensemble of actors. These actors participate in policy and decision making procedures, and international regimes aimed at regulating economy, financial, commercial and technological globalization. The core of globalization processes is a largely deregulated capitalism, mainly dominated by financial flows and markets, the so-called shareholder capitalism. Globalization is also supported by neo-liberalism which is the only surviving hegemonic ideology in today’s world after the collapse of communism. But, globalization has turned upside-down and the institutional architecture created after World War 2 has become inadequate. Yet, universal political and legal principals, as expressed in the UN Charter, the major conventions and resolutions dedicated to justice, human rights or economic and social process, still provides a legitimate normative framework for global governance. These principals have been neglected by the powerful actors of neo-liberal globalization. Legitimate global governance can be realized only if it is reconstituted to serve the common good and benefit of human kind as a whole. Legitimate global governance must be based on statehood and the principals of democratic and participatory politics. New institutional configurations is required to ensure public interest over corporate interest, with an effective trade-off between economic growth and social regulations.

4. Globalization and Global Governance.
(1) It is the management of information and knowledge about global tool – democratic principles, norms and standards, human rights, and international laws and legal practices.
(2) It means emergence of international and global organizations to facilitate global governance.

5. Theoretical Foundations for Global Governance.
(1) Peace treaty of Westphalia and Osnabruck. It was concerned with territoriality, which is political community with fixed border, sovereignty rests with states or government has supreme and exclusive authority, and country is independent and nation state as independent, autonomous, political, economy and social activities with the border.