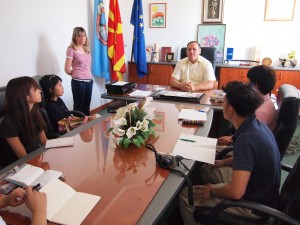 In Macedonia
August 22th, the study tour group met the Mayor of Struga, Ramiz Merko, and discussed the way of understanding between different ethnic groups, the problem of unemployment and the JCCP’s activity in Struga. After that, we took part in JCCP’s activity that we picked up garbage on the road with local children who were from different ethnic groups.
(Keiki Takemasa) 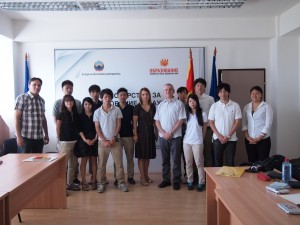 August 23th, we visit Ministry of Education and Science. We got a briefing about high education system. The ministry work for improvement in Macedonian education conditions. For example, they have some scholarships for all kinds of study, corroboration with Ministry of Labor as help for students against high employment rate. We also visited Scopije University, Faculty of Philosophy. The President of the University guided us the faculty’s building, and one of the professor delivered s a lecture about the history.
(Lena Kondo) 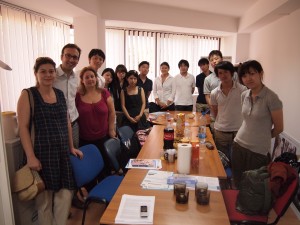 In the afternoon, we visited to the UNDP Office in Macedonia to learn about their activities and also UNICEF’s activities. We got a briefing about an education program for children to understand other ethnic groups, an issue of Roma people and a language problem such as Macedonian and Albanian. Finally, we were lectured about an importance of support and sustainability in education.
(Mika Kato) 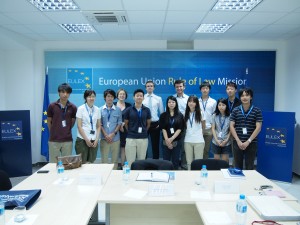 In Kosovo
August 24th, we visited EULEX Office in Pristina. EULEX is focus on Rule of Law and has three projects; 1.Police, 2.Justice, 3.Customs. They keep their works as technical assistances, not as political activities, which are composed by three aspects; Mentaling, Monitoring and Advising. We got a briefing and have discussion time about above things, or the reason that EU works in Kosovo, the effect of their works for the situation and the attitudes of citizens in Kosovo.
(Lena Kondo) 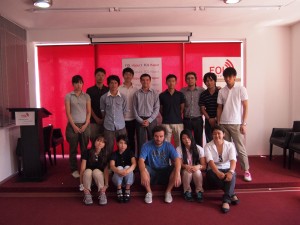 August 25th, we visited FOL in the morning. FOL is a local non-governmental organization which observes the parties, institutions and companies to avoid corruption and advocates the citizens. They have three programs; 1.the Debate Program, 2.the Good Governance Program, 3.the Public Engagement Program. They work as a connector of the institute and the citizens through discussion tables which they held or their creative actions.
(Lena Kondo) 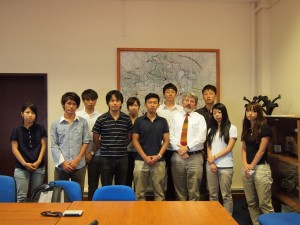 In the afternoon, we visited the UNMIK Head Quarter and got the briefing about the history of Balkan Peninsula, and their tasks. Their works have gradually transported to Kosovo institution or other organization (EULEX, OSCE etc). 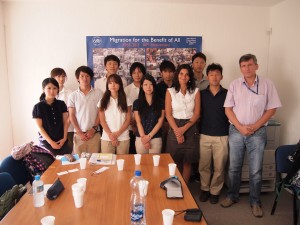 August 26th, we visited IOM in Kosovo. They are prior to solve economic problems than political. One of their activities is “Beautiful Kosovo Program” which beautifies Kosovo, through the activities of decreasing unemployment rate, integrating minorities into the society and so on. IOM Kosovo is also implementing other activities; Assisted Voluntary Return, Community Stabilization Program that is aimed at improvement of social-economic situation in Kosovo.
(Junya Yamamoto) 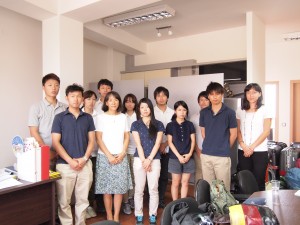 After went back to Macedonia, we visited the Japanese Honorary Consulate General. Kazu Lesnikovska who is honorary consul general, talked us about Macedonian situation of politics, society or culture from neutral viewpoint. Macedonia has some big problems on unemployment of youth, distrust of different ethnic groups or opposition of the parties, which are barrier to be a member of EU.
(Keiki Takemasa) 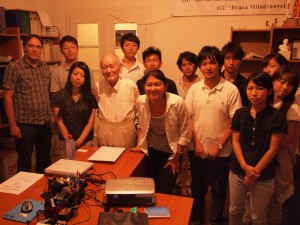 Finally, we visited JCCP Balkan Office and got some presentations on their present and past activities, and its purpose. Now they do the planting program that is focused on the understanding between different ethnic groups in Petrovec. After that, Mr. Matsumoto talked us about Japanese diplomacy after the WWII.
(Keiki Takemasa)