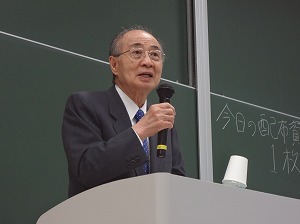 On May, 22, 2012, Mr. Akashi, former Undersecretary-General of the United Nations, visited Hosei University and gave a lecture on the United Nations in relation to its current challenges and interventions. Though the UN is carrying out on an intervention in Syria, – through ex-Secretary-General Kofi Anann’s mediation and its truce-monitoring mission, anti-government groups are claiming that current intervention by the UN is insufficient and calling for further UN involvement in Syria. But it is impossible to answer such a call. There are two reasons why the UN is unable to do so. First, the system of the Security Council. The existence of veto, held by five permanent members, is a cause of difficulty in decision making. This prerogative for the five is important in keeping powerful nations engaged in the UN. Second the interest of each member state that has a strong influence on the UN and its decision making. The UN is in some dilemma, having learned from failures in intervention in the past. A new notion was proclaimed in the Outcome Document adopted in 2005 as “the responsibility to protect”. At present, the UN is in a major transition from absolute state sovereignty to the implementation of trans-national human rights. The system of the Security Council and the divergent state interests prevent the UN from living up to the high expectation of the UN charter. On the other hand, member states can reach agreement when find a mutual interest to do so. So the key for greater efficiency of the UN is for the member states explore and reach more compromises in their struggle for interest harmonization, in order to better manage the UN. (Yuka Narikawa)