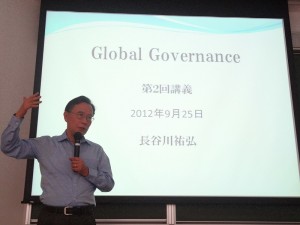 On 25th September, 2012, Professor Hasegawa gave the students his second lecture on global governance. First, he explained a realist approach to world politics and referred to Hans Morgenthau. According to Morgenthau’s argument, sovereign states are regarded as the key actors, and they act rationally to ensure their national interests in international relations. Second, the professor expounded neo-realism and presented Kenneth Waltz’s contention that there is a structure even in the anarchic world. He indicated the weakness of international laws and the epiphenomenal character of international organizations. Third, the students gained insight into liberalism and neo-liberalism. They learned that several factors such as collective security, democratic peace, democracy promotion, integration between states and interdependence play a crucial role in the theory of liberalism. In addition, it’s worth mentioning the fact that the professor emphasized human rights, freedom, private ownership and other norms as significant elements of liberalism in the international relations. In addition, the professor indicated four kinds of liberalism namely, commercial liberalism, republic liberalism, sociological liberalism, and liberal institutionalism, at the end of the lecture. (Minako Ishikawa)