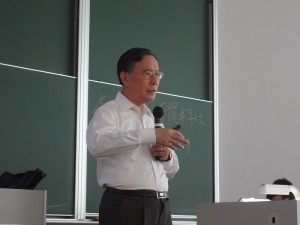 On 26th September 2012, in his introductory lecture on international organizations in the second term, Professor Hasegawa spoke first about the functional growth of the international organizations’ roles in economic, social, development and humanitarian affairs. He delineated the functional roles played by such organizations as ITU, ILO, UNEP and UNHCHR in fulfilling specific needs of the international community in telecommunication, labor standards, environmental and human rights. He also explained the special status and roles of IAEA and UN OCHA. IAEA is the organization that promotes peaceful use of atomic energy and carries out measures that prevent military application of such energy. IAEA has a unique methodology for election of its 35 Board Member States. Thirteen members are designated by the previous and 22 are elected on a geographical basis. Council Professor Hasegawa mentioned that UN OCHA is the central office that coordinates the activities of UN agencies and international NGOs in support of the victims of natural disaster and conflicts. The important roles are promotion of consistency and effectiveness. Secondly, Professor Hasegawa explained about a series of United Nations reform initiatives taken by then Secretary-General Kofi Anna in 1997 and by the General Assembly in 2005. He also mentioned the Delivering as One proposal made by a High Level Panel in 2006. (Daiki Kawabe)