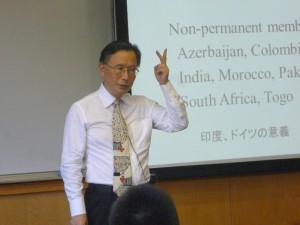 On 1st October 2012, Professor Hasegawa made a presentation on the major organizations of the UN and peacekeeping operations to the Japan Self-Defense Forces personnel at the National Olympic Park Center. In the first part of his presentation, Professor Hasegawa explained about five roles of major international organizations. In the second part he indicated four “generations” of changes that took place in the UN peacekeeping operations.The third part dealt with the role and authority of the Security Council and the enforcement process of mandates. In the fourth and fifth parts he spoke about his activities on the location and the lessons he had learned from his various experiences such as the Special Representative of the UN Secretary General (SRSG) in Timor-Leste. (Yui Narikawa)