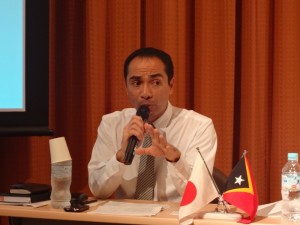 On 2nd October, 2012, Mr. Isilio Antonio de Fatima Coelho da Silva, Ambassador Extraordinary and Plenipotentiary Embassy of Democratic Republic of Timor-Leste, visited Hosei University, and gave his lecture as the third class of the global governance. The theme was “Reconstruction and state building in Timor-Leste: its accomplish, progress and vision for future”. At first, the ambassador explained the civil war of the 90s, and emphasized two causes, namely, decolonization and the Cold War. Concretely, decolonization was premature for Timor-Leste of the day since the government lost the adequate capacity, and the struggle for power between the United States and the Soviet Union also embroiled it in the dispute. Thus, these two factors provoked the civil war. And then, the ambassador mentioned the United Nations peacekeeping and peacebuilding operations. With referring to the case of Timor-Leste, all attendance, including the ambassador, professors, and students, confirmed that the United Nations has played the dedicated role toward peace in post-conflict countries. As the ambassador asserted, Timor-Leste is growing as a peaceful country now. Its accomplish, progress, and vision for the future, gave an audience further expectations toward the brighter future. (Risa Kato)