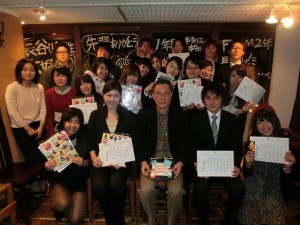 On 23rd February 2013, Mr. Yasuki Uchiyama held a farewell party –oikon– for the outgoing seminar students. He showed a memorial video which contained photos and stories of what had happened during the past year. They included memorial pictures of study tours to India/Bangladesh, Myanmar and Former Yugoslavia as well as seminars and symposia held at Hosei University including the visit of former President Ramos-Horta. After the wonderful movie, Mr. Uchiyama and his classmates gave cards to Professor Hasegawa and the third-year students who were graduating from the seminar class. Professor Hasegawa thanked Mr. Uchiyama for having organized such a memorable event and presented the certificates of appreciation and special contributions made by the seminar president and his deputies, Yui Narikawa and Minako Ishikawa. Professor Hasegawa also handed certificates of contributions and special efforts made by other members of the seminar class.
(Shogo Yoshida)