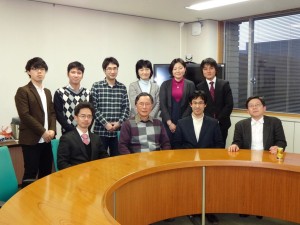 The organizational meeting for the establishment of a Peacebuilding Study Group (PBSG) was held on 2nd March 2013 at Hosei University. The meeting was attended by eleven persons from Hosei University and other institutions.

First, we identified the roles and functions of respective persons. The meeting asked Professor Sukehiro Hasegawa to act as Chairman and took note of Professor Yuji Suzuki`s agreement to act as an Advisor. The meeting then agreed to the following persons to perform respective roles: Mr. Shogo Yoshida, Secretary-General; Messrs. Norimasa Tochibayashi and Taichiro Fujino for planning and organization of the study meetings; Messrs. Kazuo Watanabe and Yusuke Noda for the management of general affairs; Ms. Asami Ikeda, for public relations; Ms. Masumi Asano for liaison with guest speakers; Ms. Saki Sakamoto for liaison with other universities; and Mr. Yasuki Uchiyama for contacting the Faculty of Law, the International Center and other departments within Hosei University.

Second, we have conducted the hearing from each member to share their ideas and views concerning the PSG’s purposes and roles, and discussed how to make this organization as an integrated institution so that we can achieve specific outcomes and achievements.

Thirdly, we also discussed the process of the forthcoming seminar which will be held on 20th April and 11th May 2013.