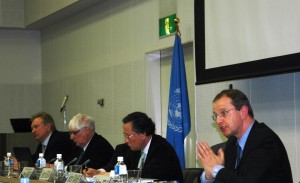 On 12 March 2013, the 17th interactive seminar on global issues was held at United Nations University, Tokyo. It was entitled “Civilians in Harm’s Way: A Tale of Two Protection Norms”. In this seminar, the participants discussed the two complex concepts: Responsibility to Protect (R2P) and Protection of Civilian (POC).
First of all, Professor Hasegawa introduced the presenters: Dr. Charles Sampford, Professor of Law and Research Professor of Ethics at Griffith University, and Dr. Vesselin Popovski, Senior Academic Programme Officer of UNU-ISP.
Then, Professor Sampford made a presentation about his analysis on their development of R2P and POC as international norms. According to his analysis, R2P emerged as a way of dealing with the difficult issues raised by the genocide in Rwanda and the Kosovo war, whereas POC starts with an existing armed conflict and seeks to protect civilians.
Next, Dr. Popovski made a presentation about their difference between R2P and POC and the “myth” of R2P. He compared R2P with POC in the way of their legal sources and actors. Especially, he pointed out that R2P derives from international laws related to war crimes, genocide and so on, whereas POC originates from international humanitarian laws (IHL) such as 1949 Fourth Geneva Convention and 1951 Refugee Laws. In addition, he also mentioned the two “myth” of R2P: (1) R2P is Western, a neo-imperialist concept, and (2) R2P is about military intervention. According to him, these are completely wrong because the pioneers of R2P were two Africans: Francis Deng and Kofi Annan, and because R2P is only 0.33% about military intervention.
After their presentation, three guests: His Excellency Dr. Charles Murigande, Ambassador Extraordinary and Plenipotentiary of Rwanda to Japan, Mr. Reiichiro Takahashi, Director-General, International Peace Cooperation Headquarters, Cabinet Office, Government of Japan, and Dr. Johan Cels, Representative in Japan, United Nations High Commissioner for Refugees (UNHCR), made a few comments. In particular, Ambassador Murigande remarked that the key thing is political wills of the permanent members of United Nations Security Council (P5) because the United Nations could implement no measures unless P5 didn’t admits UN’s taking all necessary means for R2P and POC.
Finally, some audiences asked several interesting questions of the presenters and commentators.