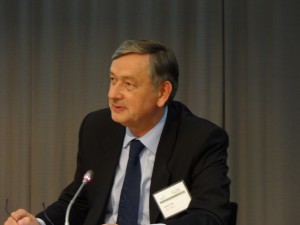 Danilo Türk,  Former President of the Republic of Slovenia

The annual conference of the Academic Council on the United Nations System (ACUNS) was held at Lund University in Sweden from 17 to 19 June 2013. The theme of this year`s conference was “Leadership in Global Governance.” More than 200 scholars and researchers from all over the world participated in the conference. (The photo shows, Former President of the Republic of Slovenia Danilo Türk speaking at the last plenary session along with David Malone, Rector of UN University.)

Professor Hasegawa discussed the importance of primordial leadership for post-conflict countries and the need for national leaders to rise above political infightings and promote accountability. Also participated in the conference from Japan were Mr. Sumihiro Kuyama, former Deputy Executive Director of HABITAT, Professors Mariko Shoji of Keiai University and Associate Professor Katsumi Ishizuka of Kyoei University who presented a paper on “Leadership of UN Peacekeeping in Sudan.” The ACUNS conference was a welcome opportunity for UN practitioners and scholars to engage together and contribute to effective research on the future role of the United Nations.”