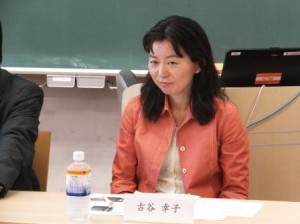 On 27 June 2013, during 4th period class, Minako Ishikawa made a presentation about an armed conflict of Cambodia in 1997. Then, Risa Kato talked about current situation of Cambodia.
During 5th period class, a joint seminar was held with Kyoritsu Women’s University and Toyo Eiwa University students. Ms. Sachiko Furuya explained history and current situation of Afghanistan, as well as Japanese assistance toward to Afghanistan. Professor Kurosawa made some comments about her speech. Then Mr. Ikeda, professor of Toyo Eiwa University, commented that corruption is different meaning with perspective of country. After that Mr. Tateyama, ex-professor of National Defense Academy of Japan, explained the reason Japan has supported Afghanistan. (Yoon Junho)