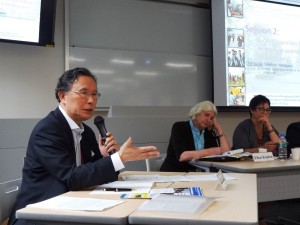 A two day international symposium entitled, “Transforming Conflict and Building Cohesion through Identity,” was held at Doshisha University in the historic scenic city, Kyoto in the first week of July, on 5 and 6 July 2013. The symposium brought together anthropologists, sociologists and political scientists from around the world.

Some 13 scholars and several students from the host university discussed diverse aspects of identity in relation to conflict and peace building. Eiji Oyamada, professor of the host institution opened the conference on the 5th July with a welcome note. In the first session chaired by Professor Hisae Nakanishi from Doshisha University, Professors Pamela J. Steward and Andrew Strathern of Department of Anthropology of the University Pittsburg, USA analyzed identity as problem as well as an effective tool of solution.

Former UNESCO Assistant Secretary General and President of Imagine Africa, Pierre Sane, chaired the fourth session. Professor, Waleed Al-Modallal of The Islamic University in Gaza, Palestine in the session delivered on “The conflict between Jews, Muslims and Christians on the land of Palestine and the impact of national and religious identity in this conflict in the light of the rise of religious movements in the region and worldwide.”

Professor Andrew Dawson, University of Melbourne, Australia, delivered on “Identity sameness and piracy in ethnic conflict: the case of Bruce Lee in the post-war re-symbolization of Bosnia and Herzegovina” and Professor Jonathan C. Momba, University of Zambia, Lusaka, Zambia, presented on “Centralized State Power Identity Crisis and Conflict in Africa.” Professor Bouzid Boumediene, Department of Philosophy, University of Oran, Algeria) spoke on “Identity and the Conflict in the Sahel: Contrasting Interpretation of War and Peace.” Lecturer Fredrick Fawn, University of St. Andrews, United Kingdom delivered on “Transforming Conflict and Building Cohesion through Identity: The Challenges of the Abkhaz-Georgian Case.”

In its final concluding session, Professor Hasegawa summarized the implications of key points made by several speakers including the notion of personalities that transcended in the form of karma over generations. Presenting Sri Lankan conflict as part of his team, Mr. Guneshwor Ojha, a Nepalese student at Doshisha suggested that Karma principal raised by Professor Hasegawa can actually form a strong chord in uniting Tamils and Sinhalese who were engaged in a violent civil war in Sri Lanka as both the religions of both the groups believe profess Karma principal. Mr. Ojha’s team members Aya Kaino and Emibaeva Nazgul shed light on the aspects of Sri Lankan conflict and intervention measures.

Similarly, another student group comprising of Megumi Ingaka, Kaho Suzuki and Atsushi Takabatake explored how to apply a systematic set of theories and methodologies to proposed interventions in the conflict in Sudan.

Commenting on students’ presentation Professor Hasegawa reminded students to be particular about research methodology and on the selection of sources. He advised students that a good researcher should employ multiple sources which would result to genuine findings. He stressed on empirical research encouraging students for field visits. “In any conflict situation justice is a key factor and a researcher should not avoid the justice issue,” remarked the professor.