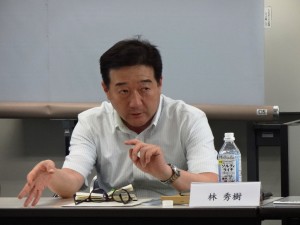 At the fourth seminar of peacebuilding research group, Captain Hideki Hayashi of the Ministry of Defense explained the nature of “collateral damage” and how it happens by citing three examples. When the Nation State exercises its state military based on its sovereign right to “use of Force” , the aforementioned “use of Force” “jus in bello” shall be applied and covered by the “Law of war”; such as “law of Armed conflicts”, “rules of war” and “international humanitarian laws”.

To secure the protection of civilians, it is inevitably necessary to clearly distinguish the combatants and civilians based on their respective requirements for their status. In other words, before the cold war, the several rules which stipulates the war time laws, it was very clear who was qualified to implement the military actions and who was not qualified to implement the military actions.

However, after the end of the cold war, the forms of armed conflicts have been shifted from the old traditional clear type which was one sovereign nation state versus to one sovereign nation state toward the new types armed conflicts such as ethnic wars, civil wars and terrorism. Further to this, the violence rooting from the economic disparity between rich and poor and crimes arise the actual spot.

The above-mentioned forms of armed conflict explicit those persons who are not satisfying the necessary requirements to be recognized as combatants are in fact exercising the military actions. In addition to this, the main problems with regard to this, those persons who are not entitled as combatants do not abide by the International Humanitarian Laws as “jus in bello” or in other words, they are actually infringing the rules of how to fight against each others.

As a consequence, in consideration of the complicated modern types of wars which several factors have meshed and collated, firstly, civilians are currently exposed themselves in the situations in which they will become the subjects of collateral damage caused by the military actions interpreted in the context of old type wars. Secondly, in addition to this aforementioned risk, civilians cannot avoid to become the subjects of the targets by the persons who are not entitled as legal combatants. Thirdly, furthermore, civilians are in the situation which might receive damage collaterally by the use of weapons based on the “Protection of Civilians” in the United Nations mandates. In conclusions, aforementioned three points and reasons, civilians are currently obliged to live in the circumstances whenever they might be subjects of triple collateral damages.

Following Mr. Hayashi’s presentation, comments were made by Dr. Katsumi Ishizuka, Professor of International Business Management at Kyoei University, and Ms. Chika Saito, Manager of the Consulting Department at System Science Consultants Inc. Professor Ishizuka’s comments included discussions over the need for those parties wanting to contribute within PKO activities to have proper preparation beforehand. Ms Saito, shared a broad range of observations and thoughts and commented that by using the word “Collateral Damage”, “false legitimacy” was created to justify “Intentional” Collateral Damage. It meant the use of force beyond “legitimate self-defense based on convincing evidence” and without intense effort to minimize its effects on civilians.

The other participants then raised questions and made comments. Mr. Ken Inoue, who worked on governance in East Timor previously with the United Nations mission, commented that from his perspective the current trend in conflicts as internal affairs have begun to create an overlap in the role of military and police. Mr. Hayashi stated that this should not be the case as policing was not a duty prescribed to military personnel. Mr. Tetsuya Aoki of Oriental Consultants shared the perspective of consultants, speaking of the risk and uncertainty that comes with changing security situations, citing Afghanistan as an example of where security worsened after initially improving. Ms. Ai Kihara-Hunt a post-doctorate researcher at the University of Essex and former staff of the UN High Commissioner for Human Rights office asked for further clarification on the role of peacekeepers in protecting civilians, to which Mr. Hayashi cited such considerations as the protection of civilians from illegal activities does not fall into a peacekeeper’s duties, but is the responsibility of the local police. Ms. Kaoru Nemoto of former staff of UNHCR asked on the stance of PKO missions on paying compensation in the event of collateral damage taking non-combatant lives. Mr. Hayashi stated that compensation is paid if the circumstances meet proscribed criteria. Mr. Jason Pratt, a graduate student of Hosei University and an officer at the Embassy of the Islamic Republic of Afghanistan, commented on the difficulty of rooting out collateral damage as there are groups that actively seek to use civilians as shields and not pursuing such individuals is a risk unto itself. The final comments from the audience came from Mr. Onoda, a lawyer, who stated that the legal issues surrounding collateral damage have become much more difficult to sort out with the changes in modern warfare. Final closing remarks then were made by Professor Hasegawa who discussed the need to consider the implications of collateral damage in terms of three key factors: intentionality, legality, and legitimacy.

*You can read the minute of this seminar in Japanese here.