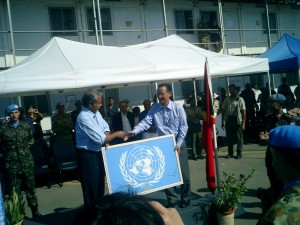 The longest-running English language monthly magazine in Switzerland, Swiss News, carried a story about the transfer of sovereign power from the United Nations to the newly independent nation of Timor-Leste. The photo shows Special Representative of the Secretary-General of the United Nations Sukehiro Hasegawa handing over the flag of the United Nations to President of the Democratic Republic of Timor-Leste Xanana Gusmao on 19 May 2005. Since 1982, Swiss News has brought Swiss culture, business, and news to increasingly diverse, international readership of 60,000 in Switzerland. Swiss News is distributed to premier hotels in the country and is one of the few magazines to be circulated within the World Economic Forum Annual Meeting in Davos.