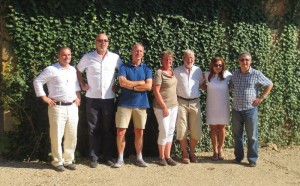 Former UN Volunteer electoral supervisors and their families along with retired UN officials, colleagues and friends celebrated on 16 and 17 August 2013 the 20th anniversary of the Cambodian elections held under the auspices of the United Nations Transitional Authority in Cambodia (UNTAC) in 1993. The anniversary event, organized by former UN Volunteer electoral supervisor and now Head of UNDP Sub-Office in Hargeisa, Somalia, Stephen Kinloch-Pichat, took place in Rabillière, Saint-Laurent-d’Oingt, France.

In a message to the reunion, former Special Representative of the Secretary-General Yasushi Akashi underlined the historic achievement made at that time by the United Nations and the entire international community. Akashi stated that despite formidable odds, all U.N. member states and U.N. bodies such as the UN Volunteer programme were united in achieving the important task entrusted to them, to bring about free and democratic elections. He saluted UN volunteers` dedication, vision, courage and solidarity.

At the opening ceremony, Bill Jackson, former Chief of External Relations of the UN Volunteer programme, paid a special tribute to UN Volunteer District Electoral Supervisor Atsuhito Nakata and national interpreter Lek Sophiep, who died in Kampong Tom on 8 April 1993. He also expressed his profound appreciation of the outstanding support for UNV provided by the Government of Japan and by Atsuhito`s parents. Jackson said “Atsu`s father Takehito Nakata, supported by his mother Keiko-san and sister Junko-san, has consistently demonstrated the quality of resignation to what life sends, and the discipline to make something positive out of adversity…”

Former Deputy Executive Coordinator Sukehiro Hasegawa delivered a lecture on the evolutionary changes that have taken place in the concept of peace during the last 20 years and in the implementation of UN peacekeeping and peacebuilding operations. Kevin Gilroy, Chief of UNV Peace Operations explained how the roles of UN Volunteers have developed over the past 20 years.

The memorial programme included a visit to Rapetour Castle in Theyzé, a concert performed by cellist André Gonnet and pianist Jacqueline Coivous, and visit to wine cellars run by the Paul Durdilly family at Combefort in the beautiful Beaujolais region.

“The ‘entertainment’ on the Friday, 16 August, was excellent – the visit to the maison forte was superb, the lunch nice (even if the waitress managed to pour an ice-cold pastis down my back on what was a very hot day!) And the afternoon concert in the John McGrew Museum was very pleasant,” said Bill Jackson.

Stephen Kinloch Pichat, who coordinated the event, said, “Several people found the ceremony with the UN flag moving; and the session in which everyone introduced themselves was very revealing – of the‘pre-Cambodia’ and the‘post-Cambodia’ in so many lives. The lunch was typically French, lasting for hours and complete with the hurdy-gurdy organ! The local dimension to it all was particularly pleasant, with the presence of a Mayor and Deputy Mayor of two different villages, the Durdilly family, Ann Matagrin and Jacques Adrian of the Montgelin guesthouse, etc. Altogether an occasion in which I was proud and privileged to take part.”

On behalf of the participants, Stephen Kinloch Pichat conveyed their special thanks to the partners ‘on the ground’: the Mayor of Saint-Laurent-d’Oingt, Mr. Paul Perigeat, and Deputy Mayor of Le Bois-d’Oingt, Mr. Henri de Saint-Jean; the Peace Soldiers International Association (Laurent Attar-Bayrou, Marie, Eric and Pierrot); the owners of the Rapetour castle (Frederic and Mess Dhenain); Andre Gonnet and Jacqueline Coivoux; the Paul Durdilly family; the managers of the various guest-houses (especially Ann Matagrin and Jacques Adrian at Montgelin); Arnaud Ozil and the Tamalya catering team, and Ms. Marie-Chantal Daspres (Le Progrès newspaper).

“Our gratitude,” Stephen Kinloch added, “also goes to our colleagues and former colleagues of UNTAC and the UN Volunteer Programme who shared their experience, reflections and advice (Yasushi Akashi, Sukehiro Hasegawa, Stefan Ciacek, Bill Jackson, Jean-Claude Rogivue, and Kevin Gilroy) or brought a personal contribution (Silvie Cléro), and of course to the former UNTAC UN Volunteers who contributed to the exhibition (in particular Nikolay and Markus!) and discussions.” “A warm toast and cheers to the team who discreetly but actively supported the overall preparation and logistics of the event (Michel Fullana, Alexandre Golay, Jerome Domergue, and Charles de Montravel!),”concluded Stephen Kinloch.

Following the anniversary event, Kevin Gilroy expressed his feeling. “Like everyone else, that period of our lives twenty years ago was monumental – professionally and personally – and as we moved on over the years, we often have kept it to ourselves (I know I have), as one just had to be there to experience it, the good, and the bad – including the tragic loss of Atsuhito and Lek Sophiep. So it was wonderful to share with all of you, and to know that the spirit of our lost colleagues, and of that time and experience in general, lives strong amongst us, and of course, amongst the many who could not make it.” (Photos /Sylvie & Hélène Clero)