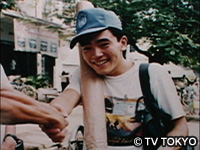 United Nations Volunteers, Bonn, Germany: On 8 April 1993, exactly 20 years ago today, Atsuhito Nakata (Atsu), a Japanese UN Volunteer working as a District Electoral Supervisor with the United Nations Transitional Authority in Cambodia (UNTAC), was killed in a tragic ambush along with his Khmer interpreter, Lek Sophiep, in the province of Kampong Thom. He was 25 years old.

Atsu was one of 465 UN Volunteers District Electoral Supervisors deployed in Cambodia with UNTAC in 1992. Alongside 50,000 Cambodian nationals, they were at the forefront of the first national elections organized in the country. They worked and lived with local communities, helped organize electoral processes at community level, and carried out massive campaigns to inform the Cambodian population about elections and democratic principles.

In recognition of Atsu’s contribution and dedication to promoting world peace, he was awarded the United Nations Dag Hammarskjold medal in 1998, which his father, Takehito Nakata received on his behalf.

Takehito Nakata was appointed Honorary Ambassador for the United Nations Volunteers (UNV) programme, and carried on Atsuhito’s desire to contribute to world peace and development. Serving as the sole Honorary Ambassador for UNV for 20 years, he promoted volunteerism throughout the world and played an important role in the proclamation of 2001 as the International Year of Volunteers. (UNV press release)

On 16 August, at the 20th anniversary of the Cambodian elections held in Rabillière, Saint-Laurent-d’Oingt, France, former UN Volunteer electoral supervisor and now Head of UNDP Sub-Office in Hargeisa, Somalia, Stephen Kinloch-Pichat, presided over the opening ceremony. Mr. Bill Jackson, former Chief of External Relations of the UN Volunteer programme, joined by other participants, paid a special tribute to UN Volunteer District Electoral Supervisor Atsuhito Nakata and national interpreter Lek Sophiep, who died in Kampong Tom on 8 April 1993. Mr. Jackson also expressed his profound appreciation of the outstanding support for UNV provided by the Government of Japan and by Atsuhito`s parents. Jackson said that he had anticipated an angry reaction to Atu`s murder from his parents and the Japanese authority. On the contrary, thanks to unwavering support from Atsu`s father Takehito Nakata along with his mother and sister, they had consistently demonstrated the quality of resignation to what life sends, and the discipline to make something positive out of adversity. Jackson expressed his hope and belief that the lessons had been learnt from that tragic event regarding appropriate roles for UN volunteers and their status within the UN peace operations.