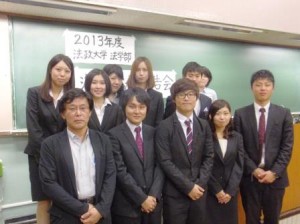 On 12 October 2013, there was seminar presentation in which 5 (Mori, Suzuki, Okada, Kurosawa, Goto) seminars reported their study tours. Firstly, Mori seminar presented about policy of America regarding Asia rebalance. Mori seminar visited Washington D.C and New York. They explained aim of their overseas study trip. The aim was to clarify policies of Obama about pacific rebalance which was presented by Obama at Australia conference. Since then, it was often reiterated by Obama. Mori seminar was divided into three groups; Japan-America, America-China, America-Europe. They also explained internationalism, isolationism, realism, liberalism. Obama government was liberalism.
Japan-America group, after that, presented about relationship between America and Japan. There was a conference on 2012, the aim of which was security assurance. The relationship between America and Japan is gradually becoming strong since 2009.
America-China group presented that there were not the expansion of armaments between America and China. They also explained about SSD. The feature of SSD was that there was no armed conflict by misunderstanding.
America-Europe group presented that America decided withdrawal of army which was called Heavy Brigade Combat Team.
The conclusion of Mori seminar was that Obama government has good conduct engagement and hedge. They also have conducted policy of Asia rebalance by using soft power not using hard power.

Secondly, Suzuki seminar presented about relationship between Japan and Vietnam.
They visited Vietnam. The relationship between Japan and Vietnam has kept over 40 years. Suzuki seminar studied about Vietnam before going there. On 9 July 2013, they studied about basic Vietnamese history and today. They felt that the viewpoints of geopolitics and difference of a political system was important. Also, communism has not been reiterated in Vietnam, it was very dangerous to discuss political system in public in Vietnam. Suzuki seminar, however, did not see any demonstration in Vietnam during their stay.
They also explained about the policy of Doimoi. Vietnamese economy has grown by conducting that policy. Suzuki seminar visited a company named Kinden, which was involved in ODA, particularly in infrastructure. They also visited JICA office in Hanoi. A staff of JICA explained that infrastructure was important in Vietnam.
Suzuki seminar felt that not only culture exchange but also study exchange were important.

Fourthly, Kurosawa seminar presented about Cambodia. Kurosawa seminar was divided into three groups; Governance team, Education team, Human rights team. They visited Cambodia because Cambodia has started from zero due to conflicts which lasted for long time. Therefore, foundation of state was destroyed. Also lots of human resources were killed by Khmer Rouge.
Firstly, Governance team presented history of political system in Cambodia. The operation of UNTAC started from 1992, and finished in 1993. The Cambodia government was ward-heeling politics such as bribe. The reason that the Cambodia government was ward-heeling politics was low salary, a lack of awareness of ward-heeling politics, etc. The conclusion of Governance team was that reinforcement of another institution such as mass communication, an ombudsman was necessary.
Secondly, Human Rights team presented about mine victims in Cambodia. Many mines were buried in Cambodia during the conflict.
This team thought about three problems about mine victims;
1. Does the Cambodia government support mine victims?
2. How does Cambodia conduct support such as mental and physical care to children who have damaged by mines?
3. Does vocational training, support of returnees to society is guaranteed in public?
This group explained that support to mine victims was not well conducted because of shortage of funds and lack of ability.
Finally, the Education team presented about after conflict, how have approach of education support (filed, actor) been changed?
There was merit and demerit after conflict. The demerit was that education institution such as schools were destroyed during the conflicts. On the other hand, the merit was that people could learn about conflict so that conflict did not occur easily.
The Education team thought three problems about education in Cambodia;
1. After conflict, how have approach of education support been changed?
2. Why Cambodia government could not create education policy early?
3. What are lessons about reconstruction education in Cambodia?
After that, they explained two reasons about three problems. First, there were few resources in Cambodia, so that Cambodia government needs to secure the supply of goods. Second, Cambodia had problems such as unstable politics, shortage of resources, etc.

Finally, Goto seminar presented about Indonesia and Myanmar. The aim of overseas study of this seminar was to understand the reality of international cooperation and development. They visited many institutions such as ADB, DNP, etc.