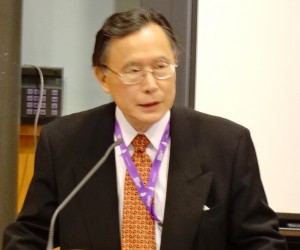 As one of three speakers at the public debate held as part of the International Humanitarian and Human Rights in Armed Conflicts organized the Raoul Wallenberg Institute (RWI) in Lund, Sweden, on 30 September and 1 October 2013, Professor Sukehiro Hasegawa spoke about two approaches taken by Japan and Korea on the one hand and Indonesia and Timor-Leste on the other hand with regard to sexual misconducts of soldiers during war and armed conflict. Two other speakers, Margot Wallstrom, former UN Special Representative of the UN Secretary-General and Almiro Rodriques, Judge at the Constitutional Court of Kosovo spoke respectively about “Another kind of war – on conflict-related sexual violence” and “Massive violations character and its implications as a challenge for international human rights and international humanitarian law.”