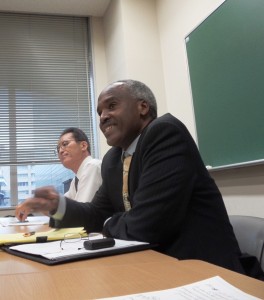 Mr. Charles Murigande, Ambassador of the Republic of Rwanda spoke at a seminar organized by the Japan Academic Association for International Peace Building held at Hosei University on September 27, 2014. In presenting his speech entitled “Rwanda 20 Years after the genocide”, Ambassador Murigande emphasized that Rwanda had been able to build one of the most stable and safest countries in Sub-Sahara Africa.

During the 1994 genocide in Rwanda, up to one million people were killed and as many as 50,000 women were raped, leaving the whole nation traumatized. After the tragedy, Rwanda has been making the greatest effort to rebuild the country with the ultimate aim of all Rwandans once again living side by side in peace. Rwanda was once destroyed completely and fallen apart, but with all the efforts made by the Government of Rwanda and many countries including Japan, Rwanda once again regained sovereignty, peace and stability. Twenty years of transformation of Rwanda enabled significant economic and social progress. Nowadays Rwanda is regarded as one of the most stable and safest countries in Sub-Sahara Africa. There are many things we can learn from the 20 years after the genocide in Rwanda today.

Following Ambassador Murigande’s presentation, almost all of seventeen participants joined in active discussion of such issues as the role of media during the 1994 genocide, reconciliation between Tutsi and Hutu after the genocide, retributive vs. restorative justice, truth telling and the Gacaca court system, the role of UN and the international community, return of and non-returning refugees, reconstruction and transformation of the Rwanda society. Ambassador Yoshitaka Hanada explained the post-conflict developments of Rwanda and Timor-Leste where he had just served for nearly three years. Professor Sukehiro Hasegawa synthesized some of the key issues discussed.

The seminar program and a list of participants are as follows.

[Theme]
Rwanda 20 Years after the genocide

[Speaker]
His Excellency Mr. Charles Murigande
–Ambassador Plenipotentiary and Extraordinary of the Republic of Rwanda

[Programme]
15:00  Opening remarks by Professor Katsumi Ishizuka, Kyoei University
15:05  Introduction of the ambassador
15:10  Presentation by Ambassador Charles Murigande
“Rwanda – 20 years after the genocide”
15:50  Comments by a panel of commentators to be decided (5 minutes each)
16:15  Open discussion
16:50  Concluding remarks by the moderator
16:55  Presentation of a gift
17:00  End of the seminar

[Guest Speaker]
Ambassador Murigande was born in Butare, Rwanda on August 15, 1958.
–PhD in Mathematics from University of Namur, Belgium.
–Adviser to the President on Foreign Affairs (September 1994 to August 1995)
–Minister of Transport and Communications (September 1995 to March 1997)
–Rector of the National University of Rwanda (April 1997 to May 1998)
–Elected Secretary General of the Rwandan Patriotic Front (RPF) on February 15, 1998 and was reelected on December 23, 2002.
–Minister of Foreign Affairs and Regional Cooperation (November 2002 – March 2008)
–Minister of Cabinet Affairs (March 2008 – July 2008)
–Minister of Education (July, 2008 – May, 2011)
–Ambassador to Japan (May 6, 2011), Concurrently ambassador to Australia, New Zealand, The Philippines and Thailand