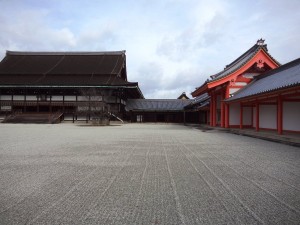 Chinese, Korean and other visitors from abroad visited the historical sites in Kyoto before and after the Asian Seminar.

The Kyoto Imperial Palace (京都御所, Kyōto Gosho) used to be the residence of Japan’s Imperial Family until 1868, when the emperor and capital were moved from Kyoto to Tokyo. The current Kyoto Imperial Palace was reconstructed in 1855 after it had burnt down and moved around town repeatedly over the centuries.

Nijo Castle (二条城, Nijōjō) was built in 1603 as the Kyoto residence of Tokugawa Ieyasu, the first shogun of the Edo Period (1603-1867). His grandson Iemitsu completed the castle’s palace buildings 23 years later and further expanded the castle by adding a five story castle. The castle consists of two concentric rings of fortifications, the Ninomaru Palace, the ruins of the Honmaru Palace; various support buildings and several gardens.

The Nishijin Textile Center, located in Imadegawa, is a modern-style building where demonstrations and exhibits are held on the theme of the traditional Nishijin textile industry. In addition to a kimono show (6 times a day) are hand-weaving demonstrations and a display of historical materials.