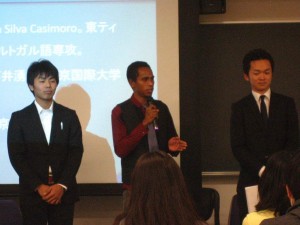 A Timorese student, Orlando da Silva Casimiro, visited Tokyo to prepare for his study in Japan. He visited the University of Tokyo, Waseda University and Hosei University. Orlando also met Professor Hasegawa and talked about his ambition to enter a graduate school in Japan.

I am Shotaro Fujita. I belong to HaLuz which is a student NGO to lend aid to East Timor. This time, we cordially invited Orlando da Silva Casimiro to Japan. Orlando is an undergraduate student of the National University of East Timor, and He is so intelligent that he can speak as many as five languages: Tetun which is spoken in East Timor, Portuguese, Bahasa Indonesian and English.

There are three reasons why Orlando comes to Japan. First, he wants to broaden his knowledge because he has never gone abroad and never seen any developed countries. Therefore we let Orlando go through practical experience: Japanese trains, Japanese buildings, Japanese culture and so forth in order to feel a gap between Japan and East Timor. Second, we want Japanese people, including us, to know East Timor more. East Timor, one of the developing countries in Southeast Asia, has many social problems such as infrastructure, education and so forth, whereas East Timor also has something that Japan has lost through modernization. So we would like to everyone to feel a strong attraction to East Timor by all means. Finally, Orlando is going to study in Japan next year, so he visited the University of Tokyo, Waseda University and Hosei University. On 12th January 2015, Orlando told Professor Hasegawa his ambitious to enter a graduate school, and they discussed political difference between East Timor and Japan.

Orlando told me have a good time. We are deeply grateful to Professor Hasegawa for his kind cooperation.