In his essay below, Mr. Ian Martin who served as SRSG and head of UN peace missions in Libya, Nepal, Timor-Leste and other countries wrote that all UN peace operations are political in nature and there is a case for designer missions and expressed his views on the next UN reform. 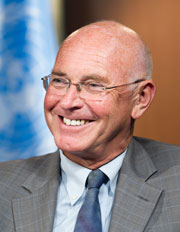 Martin, Ian [2010] “All Peace Operations Are Political: a Case for Designer Missions and the Next UN Reform” in Review of Political Missions 2010, edited by Center on International Cooperation, pp.8-14, http://cic.nyu.edu/content/review-political-missions-2010, (cited 2015-03-12).