Sukehiro Hasegawa, Former Special Representative of UN Secretary-General, has served in various UN peacekeeping operations including one in East Timor. He calls the moment the Japanese government decided to send Self Defense Force to Cambodia “a turning point.” He believes Japan should support UN peacekeeping efforts both through the SDF and civilian initiatives. He says “I hope that Japan will continue to be guided by its own aspiration to attain an honored place in the international community, as Shigemitsu mentioned in 1956. I think we should keep that pledge and dream through continued engagement with the UN. ” For a full story, please click http://www3.nhk.or.jp/nhkworld/newsroomtokyo/aired/20150930.html. 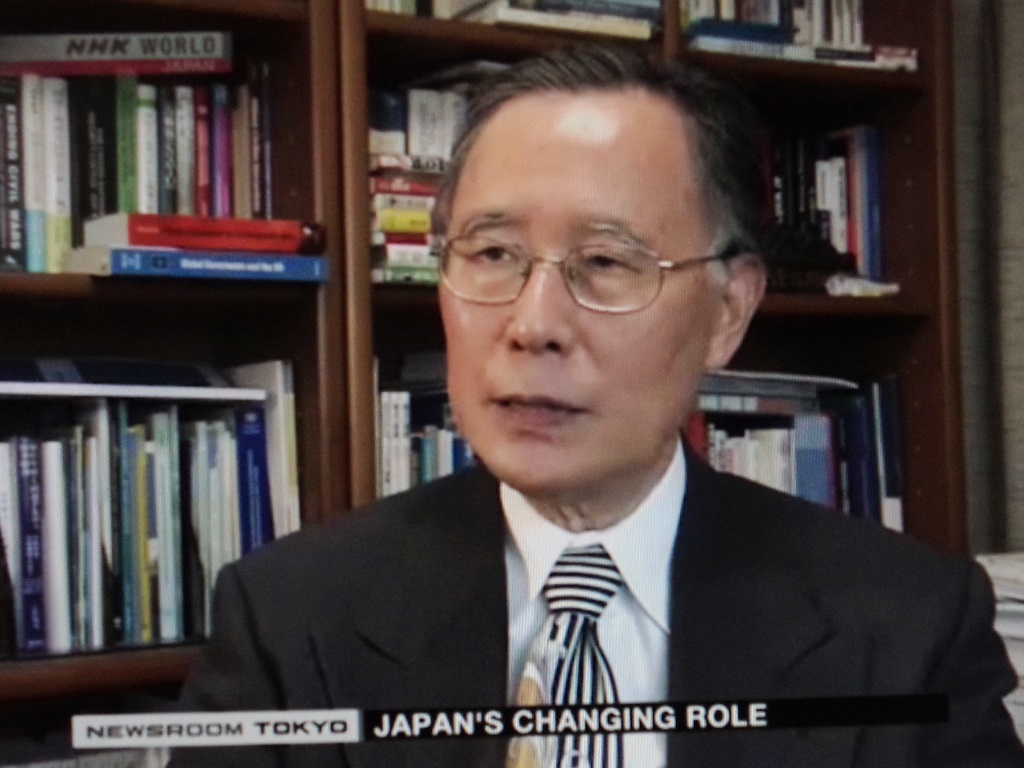 1. On behalf of the Government and the people of Japan, I wish to express our profound gratitude for the warm and friendly words just spoken by the President in welcoming my country to the United Nations. It is indeed a matter for gratification to us that our admission to this great world Organization has taken place during the Presidency of this Assembly of a distinguished statesman and diplomat who represents our traditional friend, Thailand. I wish also to express my thanks for the kind greetings of the Vice Presidents of this Assembly.

Japan first applied for membership nearly five years ago. It has been a long and anxious wait for us. But our people fully understand that the failure to be admitted until today has been due to external reasons beyond our control. This has given us all the more cause to receive with a deeper sense of gratitude the words spoken by the Delegates of those friendly States which have so ardently supported the membership of my country. I wish to avail myself of this opportunity to express our sincere appreciation to the eminent Delegates of those States which have endeavored unsparingly these long years to realize our cherished hope. Let me also tender our heartfelt thanks to the Secretary-General who has steadfastly supported our cause with his great wisdom from which we have benefited enormously.

2. The people of Japan today desire peace for all time and are deeply conscious of the high ideals controlling human relationships. We have determined to preserve our security and existence, trusting in the justice and faith of the peace-loving peoples of the world. We recognize that all peoples of the world have the right to live in peace, free from fear and want. We desire to occupy an honored place in an international society striving for the preservation of peace, and the banishment of tyranny and slavery, oppression and intolerance, for all time from the earth. We believe that no nation is responsible to itself alone, but that the laws of political morality are universal; and that obedience to such laws is incumbent upon all nations who would sustain their own sovereignty and justify their sovereign relationship with other nations.

These sentiments express the firm conviction of the people of Japan – a conviction expressed in the preamble of our Constitution and one which is in complete accord with the purposes and principles set forth in the Charter of the United Nations. The application for membership submitted by Japan in June 1952 stated: “The Japanese people have an earnest desire to participate in the work of the United Nations and to utilize the purposes and principles of its Charter as a guide in the conduct of their affairs.” And the Declaration accompanying the application stated; “Japan accepts the obligations contained in the Charter of the United Nations and undertakes to honor them by all the means at its disposal from the day Japan becomes a Member of the United Nations”. We solemnly renew these pledges today as we take our seat among you.

3. Many grave problems now beset the world. The United Nations is faced with a momentous challenge – the crisis in the Middle East and Eastern Europe. They are evidence of the need for vigorous action by this Organization in order to maintain peace and security.

In the effort to solve the Middle East crisis and thereby to relax international tensions, the United Nations, with the overwhelming support of its Members, has played a tremendous role, the effectiveness and importance of which is indeed incalculable. It is epochal that it has created an International Emergency Force and is effectively employing it as a new instrument in coping with a most difficult situation. It is our earnest hope that the United Nations will always command the widest possible power consonant with its mission as an instrument of world peace. I feel it appropriate at this point to pay tribute to the Secretary-General who has played an effective role in implementing the decision of the United Nations.

In regard to the situation in Eastern Europe, we Japanese cannot but feel deep sympathy for the plight of the people of Hungary. We fervently hope that the voice of the Hungarian people will be heard and their situation relieved in accordance with the resolutions of the United Nations.

Japan is gratified that together with the maintenance of peace, the United Nations places great importance on humanitarianism. It has taken up the problem of disarmament as a major task in the pursuit of its objective of maintaining peace. It is also devoting its efforts toward the prohibition of weapons of mass destruction because of its vital concern for humanity. Being the only country which has experienced the horrors of the atomic bomb, Japan knows its tragic consequences. It was from the standpoint of humanity in response to the earnest desire of the people that both Houses of the Diet of Japan adopted in February last a resolution calling for the prohibition of the use and testing of nuclear bombs. It came from a prayerful desire that mankind may not again be visited by the horrors of mass destruction. We earnestly hope that under the leadership of the United Nations, the great task of disarmament will be successfully consummated and mankind secured from a calamitous fate and relieved from the inhibitive psychology of fear. It is most encouraging that the United Nations is now taking active initiative in facilitating the peaceful uses of nuclear energy.

Whatever may be the nature of the uncertainties and the tensions in which the world is placed today and whatever may be their causes, there should be no problem that cannot be resolved peacefully with the united strength of eighty nations which now constitute our Organization? It would be utter folly for mankind, which today has entered upon the Atomic Age, to pursue a path that leads to its own annihilation.

4. In the region of Asia in which Japan is situated, the world situation is reflected and here, too, tensions have not receded. No one can say with certainty that a situation like that in the Middle East will not arise in Asia. I am moved to say that the United Nations, in the spirit of the Charter, must constantly be alert to situations which are a potential threat to peace and not simply cope with crises after they have occurred but devise measures to prevent them. Especially in East Asia where conditions of peace have not yet been fully restored, there are still many potential dangers. In this connection, I believe we should separate ourselves from ideological issues and devise a realistic approach to the practical problems involved. From this standpoint, Japan has resumed diplomatic relations with the Soviet Union, terminating an abnormal technical state of war which had continued for eleven years. We took this step in the belief that it would contribute to peace and security in East Asia. It goes without saying that to find the basis for lasting peace and stability in East Asia is an obligation of East Asian nations.

The basis for peace and progress in Asia is to be found in the economic development of the countries of the region. The countries of Asia today are devoting their full efforts toward their economic advancement. Not a few of them require the further assistance of the United Nations and its Members in order to make their efforts more fruitful. Japan’s relations with them are those of mutual cooperation and common destiny, whether in the political or economic fields, and she holds great expectations in the growth and development of these countries.

Nationalism thrived in Eastern Europe after the First World War and has risen in the Arab and Asian regions since the Second World War. It is a natural process in the liberation of mankind. I believe it should be fostered with understanding, but that it should avoid running into excesses or into extreme nationalism.

5. Japan today faces many difficulties in maintaining the livelihood of her people. The foremost of these difficulties is the problem of supporting an excessive population in her small territory. I need not say that the motive power to maintain livelihood and raise living standards lies in the industry of the people. Our people do not shirk hard work. Both men and women are laboring industriously at their places of work. But the great problem of national policy is how to make effective the labors of our people. We know that the best solution to our population problem is to be found in internal economic development and in the promotion of foreign trade through increased production. Hence, we are extremely sensitive to obstructions to international trade. Japan, therefore, welcomes any efforts of the United Nations to promote the freer flow of people and goods across national boundaries as an effective policy of peace. In this respect, all of us would be building a firm basis for peace and justice by developing the unexploited resources of the world and making life more abundant for peoples everywhere.

Japan is a country that has a world-wide interest in trade and commerce. At the same time, she is a country with the history and traditions of an Asian nation. Herein is to be found the reason for our participation in the Asian-African Conference at Bandung last year. We whole-heartedly support the ten principles of peace adopted by that Conference which are in complete accord with the spirit of the United Nations Charter. Peace is one and indivisible. Japan believes that the United Nations is the world’s central driving force for peace.

The substance of Japan’s political, economic and cultural life is the product of the fusion within the last century of the civilizations of the Orient and the Occident. In a way, Japan may well be regarded as a bridge between the East and the West. She is fully conscious of the great responsibilities of such a position.

May I close my remarks by expressing again before this great assembly the resolve of Japan to serve sincerely the high cause of the United Nations.