At the UN General Assembly on 29 September 2015, Japanese Prime Minister Shinzo Abe stressed his intention to provide financial and technical assistance for Syrian refugees. On the previous day, Chinese President Xi Jinping said China would expand its engagement with the UN and send 8,000 troops as part of the UN peacekeeping forces. Korean President Park Geun-hye urged the international community to focus on resolving the North Korean nuclear issue. 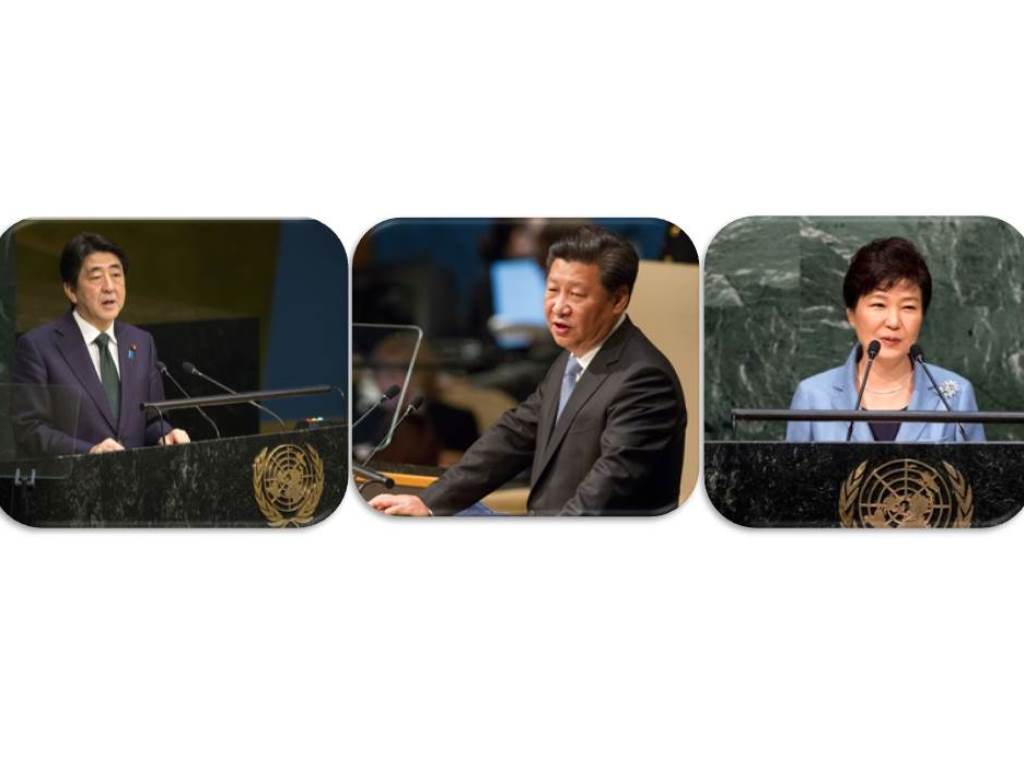 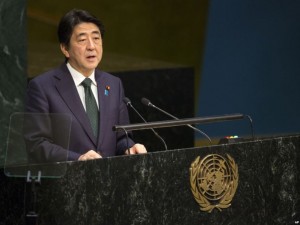 29 September 2015–– In his address to the annual high-level meeting of the General Assembly, Shinzo Abe, Prime Minister of Japan, vowed to enhance his country’s assistance to refugees and internally displaced persons from Syria and Iraq.

Underscoring its history of nation-building and fostering human resources, Mr. Abe offered Japan’s support to those who have fled their homes amid conflicts in Syria and Iraq by pledging to triple the amount of last year’s assistance, to approximately $810 million.

“In Lebanon, we will implement $2 million in new assistance measures… to impart momentum for the collaboration between humanitarian actors and development actors,” he said. “We will newly implement approximately $2.5 million in humanitarian assistance for countries neighbouring the European Union that are grappling with the acceptance of refugees and migrants.”

Mr. Abe made clear that each of these were emergency countermeasures, as Japan’s unchanging principle “is at all times to endeavour to return to the root of the problem and improve the situation.”

“It is all people acquiring the ownership by which they themselves determine the path of their own lives that is our ultimate objective,” he said.

He also pointed to the 70th anniversary of the atomic bombings of Hiroshima and Nagasaki, lamenting that this year’s review conference of the Nuclear Non-Proliferation Treaty failed to indicate guidelines for future nuclear disarmament and non-proliferation.
Determined to bring about the total elimination of nuclear weapons, Mr. Abe said “Japan is preparing a new draft resolution to promote united action by the international community.”
On related issues, he said, just as the UN does not “avert its eyes” from major concerns, Japan would work with relevant countries towards the comprehensive resolution of outstanding issues regarding the Democratic People’s Republic of Korea, including abduction, nuclear and missile matters.

As for UN reform, he said Japan would pursue Security Council reform through cooperation with the Assembly President, and his country would seek a permanent seat. Citing peacekeeping work in South Sudan, Kenya, Uganda and elsewhere, he said Japan also had laid the legal domestic framework to contribute to such efforts. 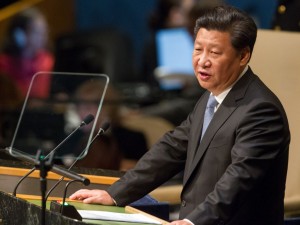 28 September 2015–– In his address to the United Nations General Assembly’s annual gathering of world leaders, the President of China warned that the security of all countries was interrelated and that no country could protect its security alone and none could find stability at the expense of another’s.

“We must abandon the Cold War mentality,” said President Xi Jinping, urging a holistic approach to both conventional and unconventional security threats, and also noting that globalization and increased connectivity had created “unprecedented opportunity.”
President Xi also urged a renewed commitment to the UN Charter, noting that China was the first country to sign it, and highlighted its underpinning of the belief of the sovereign equality of States. He called for a new form of international relations, where countries forged alliances and all countries were treated equally, regardless of their size.
He also highlighted the importance of the new development agenda.

“With close to 800 million people still living in extreme poverty, nearly 6 million children dying before the age of five and 60 million unable to attend school, the new development Agenda must be turned into action,” he said, adding that “all economies should build on a sound global eco-environment, and green, low-carbon circular sustainable development should be pursued.”

President Xi said China would honour its commitments to mitigate climate change, and he urged developed countries to do the same.

He also said that China supported a greater voice for developing countries, particularly those in Africa, in global governance. China will also establish a $1 billion, 10-year China Peace Development Fund for the UN and join the new UN peacekeeping system. The nation would establish an 8,000 troop stand-by peacekeeping force, and would give $100 million to the African Union to establish its own stand-by force.

“Let us establish a new win-win partnership for all mankind. Let prosperity, fairness and justice spread across the world,” he said.

28 September 2015–– In her address to the annual high-level meeting of the General Assembly, President Park Geun-hye of the Republic of Korea (ROK) cited the Iranian nuclear deal as she urged the international community to focus on resolving the North Korean nuclear issue.

President Park called for the resolution to the Democratic People’s Republic of Korea’s (DPRK) nuclear issue to be accorded “the highest priority” towards creating a world without nuclear weapons. She emphasized that provocation would not only “harm the hard-won mood for inter-Korean dialogue,” but also “undermine the efforts of the members of the six-party talks to reopen denuclearization talks.”

“Pushing ahead with provocations, including its nuclear development programme, will undermine the values of humanity’s peace espoused by the international community and the UN,” she said.

Dubbing it “the last remaining non-proliferation challenge,” Ms. Park said “The DPRK would do well to choose reform and opening rather than additional provocations and to endeavour to free its people from hardship.”

Ms. Park recalled that Republic of Korea “is a country that experienced a devastating war and remains scarred to this day by partition,” while underscoring her country’s acute aware of the importance of peace and its strong support of UN efforts to protect it.

She called attention to Germany’s 25th anniversary of reunification, asserting that “ending the seven-decade-on history of a divided Korean Peninsula – the last remaining vestige of the Cold War – will mark nothing less than a contribution to world peace.”

Referring to Secretary-General Ban Ki-moon’s claim that Northeast Asia lacked a regional cooperation mechanism, Ms. Park spoke of “the Northeast Asia Peace and Cooperation Initiative to create a virtuous cycle of trust-building and increased cooperation.” She elaborated that consultations among regional countries were already underway on a range of collaborative areas, including nuclear security, disaster management and health.”

With regard to climate change, Ms. Park noted that as Republic of Korea has achieved rapid industrialization, it also supports the co-existence of man and nature, saying “Korea… is actively seeking to transition towards a low-carbon economy, while actively participating in climate negotiations.”