Mr. Michael Emery, a key member of the UN Inter-agency Outreach Missions to Japan, says the UN is determined to increase Japan`s representation and points to the importance of Japanese applicants having “soft” as well as “hard” competencies and a second UN language including French, Spanish or Arabic, in addition to English to enhance employment chances in the United Nations. 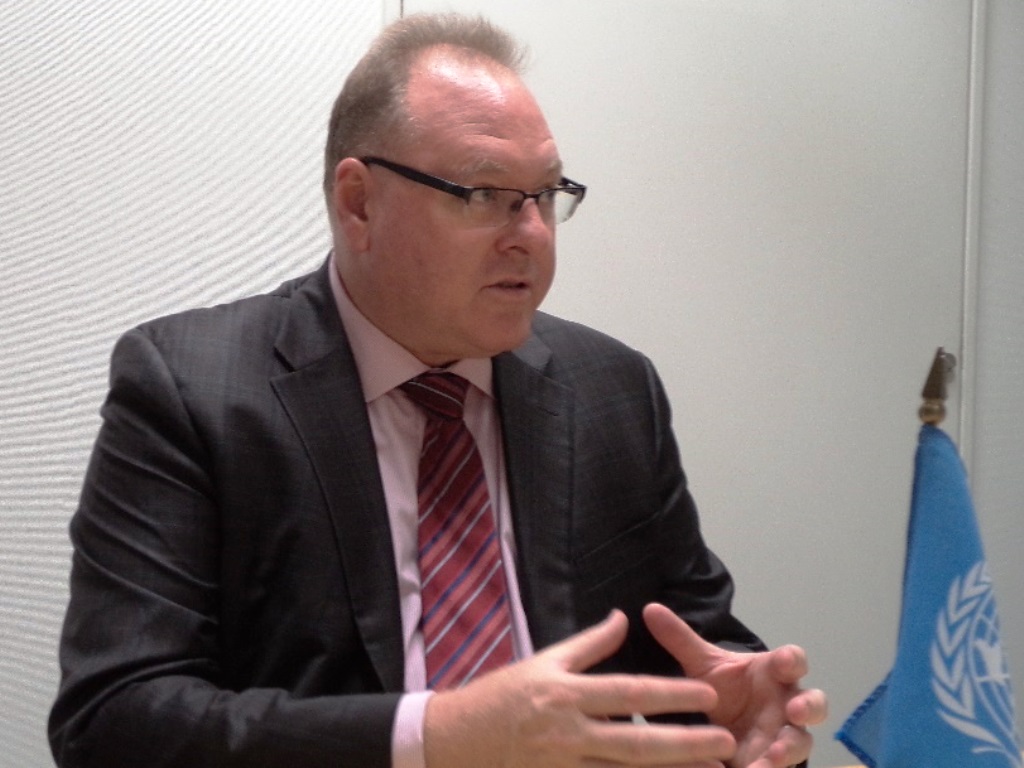 In his conversation with Professor Hasegawa, Mr. Michael Emery, a key member of the UN Inter-agency Outreach Missions and Director for Human Resources in the United Nations Population Fund (UNFPA), stressed that Japanese people should continue their contributions to international peace and development through the United Nations system. Mr. Emery at the same time noted applicants should think about acquiring a second working language of the UN to enhance employment chances in the UN. Here is a summary of his conversation with Professor Hasegawa.

Hasegawa: Today I would like to ask a few questions. Some people say that Japan’s presence at the United Nations is not enough compared with its financial contributions. You have come to Japan as senior member of the UN Inter-Agency Out-Reach Mission. Could you tell us what you expect to achieve here?

Emery: We, not only the United Nations, but my organization UNFPA, the UN Population Fund, are always keen to attract diverse talent to the organization. And we still feel that in UNFPA and other parts of United Nations system as well, the numbers of Japanese are quite low. We are determined to increase Japan`s representation. So we are searching for Japanese talent wherever we can find them.

Hasegawa: I see. You said that you’re still looking for Japanese people. What kinds of competencies do you look for in Japanese people who apply for UN positions?

Emery: I think we are looking for competencies which can be divided into two different categories, technical competencies and what we called soft competencies. For my own organization the UN Population Fund, in terms of technical competencies, we need health specialists, we need demographers, etc. But in terms of soft competencies, what we really look for are people that have real agility, professional agility, so that coming into any situation they can adapt accordingly. We look for people who have strong sense of integrity of course, because it is one of core values of the United Nations. We look for people that can innovate. That means, to quote current Secretary-General Ban Ki-moon, is that we need to be ‘fit for purpose’. And in order to be fit-for-purpose to deliver on the promise of the SDGs, we need to have work force that can innovate, and keep up with technological advances. So innovation is very very important. And probably the last competency is what we call strong ‘EQ’, or emotional intelligence. If we could sum up EQ in one word it would be awareness – awareness of how you are ‘culturally coded’, and how this impacts on a multicultural team, how we influence other people to action, and how we navigate conflicts within a team. So the whole sense of having strong EQ is also very important in application.

Hasegawa: Now I’d like to invite one of my students, who is looking to the United Nations as one of his future employment, to ask you a question.

Toda: Thank you Professor Hasegawa. My name is Akihide Toda. I’m now currently studying in Japan. The idea of working in the United Nations has been one of my dreams for a long time. However, it seems the possibility to get employed by the United Nations is comparatively small, compared with other organizations in the private sector. Recently because of the changing Japanese and global economic situation, many young people here pursue their careers opportunities through start-up companies in the private sector. But it doesn’t mean that the Japanese younger generation are not interested in the United Nations. I think with globalization, more and more young Japanese young student like me are really interested in working at the world stage. So, how do you think the United Nations can provide more opportunities to the younger generations, particularly young Japanese people wanting to get into the United Nations?

Emery: Thank you – that’s a big question! Firstly, I think you have to appreciate that the United Nations system is a massive system, I mean the UN work force is in the hundreds of thousands when we look at the staff and non-staff components of the group. So there’s always opportunities I think. But you’ve touched a very interesting point, the opportunities available to young people. In the development sector, these opportunities are getting fewer because one of philosophies of development agencies is to strengthen national capacity of developing countries. Hence in many of my Country Offices in the UN Population Fund, while we have two or three international staff in our field office, all the rest are national officers. So the entry level positions are somewhat limited. And that can be a frustration for young people, because they go into alternative employment in the private sector or start-up companies, and then I guess they get settled in their way and may be reluctant to take any risks in their mid-career by going into the United Nations. So I think there’s couple of things that we need to have. One is that the UN system needs to create more entry level opportunities. And some organizations are already doing it in the United Nations. UNFPA has taken the steps to create more P-1 and P-2 positions, UNDP is also recruiting P-1s and P-2s, which are considered entry level positions. But also on the other side, we need to be trying to attract and encourage mid-career professionals from Japan to come in, and to take a risk for working in the United Nations. And that requires a little bit more of a mindset change, not only from the individuals, but also from the private sector and companies in Japan to actually recognize the values that the experience of working for UN organizations can bring into a ‘global Japan’.

Hasegawa: Mr. Emery, I know you are busy, so this is my last question. You said that more and more entry level opportunities are being created, but as far as I understand, there are many applicants from developing countries who speak better English and who are more qualified than many Japanese young people. What can Japanese young people do because they are in difficulty in competing with those people?

Emery: I’ll correct you one thing. I don’t think they are more qualified than Japanese people – Japanese people have outstanding academic and professional achievements. English can be little bit of problem, but what I would encourage young Japanese who are interested in the UN sector to do, is to think about doing one year of study in other countries, or at least a semester to try to improve language skills. And also, what I would really focus on is learning a second language while you are in university that is a second UN language. Naturally, the number one language that should be focused on is English, followed by French or Spanish, and then by Arabic. I would say they are the most useful languages for working in the United Nations.

Hasegawa: This is the very important point that Mr. Emery is making. It is difficult but it’s important to have second UN working language. That can distinguish the applicants from others. And thank you very much, I know you are busy, so let’s end up here.

Toda: Thank you so much.