Compulsory Conciliation Commission (CCC) in the Hague decides to continue the conciliation process concerning the maritime boundary issue between Timor-Leste and Australia.

The Permanent Court of Arbitration (PCA) issued a press release on 26 September announcing the decision made by the Compulsory Conciliation Commission on 19 September to continue with the conciliation process concerning the maritime boundary issue between the Democratic Republic of Timor-Leste (“Timor-Leste”) and the Commonwealth of Australia (“Australia”) under Annex V of the United Nations Convention on the Law of the Sea (the “Convention”). With its decision, the Commission held that it had competence to continue with the compulsory conciliation proceeding which had been initiated by Timor-Leste by way of a Notice addressed to Australia pursuant to Article 298 and Annex V of the Convention.

In a hearing earlier held on 29 August, the Timorese and Australian agents and representatives made their presentations. Ms. Elisabeth Exposto, Deputy Agent of Timor-Leste, made introductory remarks and called for “just and fair” recognition of Timorese sovereignty over its maritime territory. She was followed by Mr. Xanana Gusmão, Minister of Planning and Strategic Investment and Chief Negotiator for Maritime Boundaries. Gusmão said Timor-Leste’s early years of independence were marked by vulnerability and poverty, and that this was exploited in negotiations. He said he had “tried to persuade consecutive Australian governments to sit down as friends and negotiate” but Australia turned its back and even installed listening devices in Timorese government office. Timor-Leste, Chief Negotiator Gusmão concluded his remarks by reiterating his willingness to negotiate, but he and his delegation had “not come to The Hague to ask for favors or for special treatment. We have come to seek our rights under international law. The maritime boundary between two countries should stand at halfway between them.” In concluding, Gusmão said, “Just as we fought so hard and suffered so much for our independence, Timor-Leste will not rest until we have our sovereign rights over both land and sea.”

Minister Agio Pereira, Agent of Timor-Leste, expressed his hope that the basic principle of equality of States and the fairness of the international system be maintained as the Timorese desire to bring certainty of sovereignty over its maritime territory was a matter of practical necessity for sustainable development of the young nation. Timor-Leste, Pereira said, faced an challenge of providing its young people with education, healthcare and employment.

Legal Counsel and Advocate Professor Vaughan Lowe QC and Sir Michael Wood KCMG provided the Commission with detailed explanations of the implications of treaties and agreements between the two countries.

The Australian Agent, Mr. John Reid, suggested that the maritime boundary issue should be looked at within the wider context. He referred to substantial security and development assistance provided by Australia to Timor-Leste and advocated the continuation of treaties and agreements signed by the two countries since Timor-Leste gained its independence. He emphasized that the continuation of the current arrangement would benefit both countries. 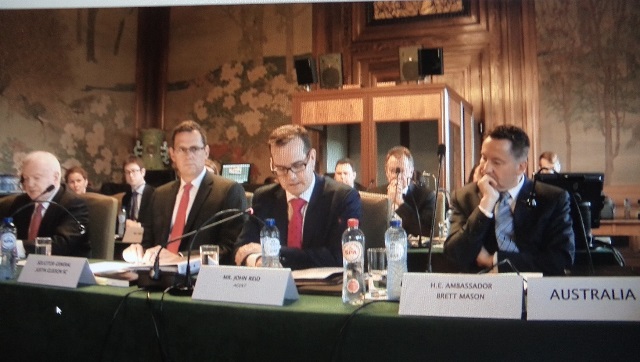 Australia’s Solicitor-General Justin Gleeson SC, made a detailed account of the issues concerning the maritime boundaries and oil resources and told the commission that the Treaty on Certain Maritime Arrangements in the Timor Sea signed in 2006 by Australia and Timor-Leste provided a stable foundation for the equitable development and exploitation of the area to the benefit of both nations. He asserted that “The treaties are reasonable and they are right and they should be respected.” The Australian delegation argued that the Commission does not have competence to conduct hearing on maritime issues and that its findings and final report on the issue will not be binding.

The following are the press release issued by the PCA on 26 September and photos of the hearing that was conducted on 29 August 2016. They are obtained from the video coverage of the morning session of the hearing that can be accessed through the PCA website. The press release may be obtained by accessing https://p2ca-cpa.org/wp-content/uploads/sites/175/2016/09/Press-Release-No.-4-EN.pdf. 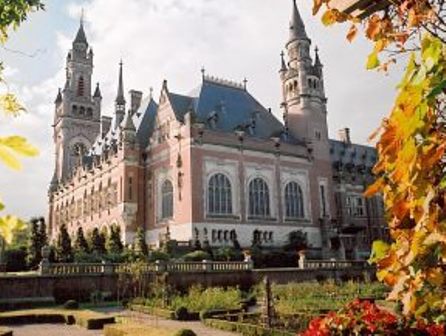 These compulsory conciliation proceedings concern the maritime boundary between Timor-Leste and Australia and were initiated by Timor-Leste by way of a Notice addressed to Australia pursuant to Article 298 and Annex V of the Convention. The conciliation is being conducted under the auspices of the Permanent Court of Arbitration (the “PCA”).

Australia’s Objections to Competence and Timor-Leste’s Response
Pursuant to the Convention, a compulsory conciliation may be initiated where a party has exercised its right to exclude disputes relating to sea boundary delimitation from compulsory arbitration and judicial settlement. Australia exercised this right by way of a declaration made on 22 March 2002. When a dispute falling within such a declaration arises, a compulsory conciliation may be initiated at the request of one of the parties to the dispute. The conclusions and recommendations of the Conciliation Commission, however, are not binding on the parties.

From the outset of these proceedings, Australia had indicated its intention to contest the competence of the Commission and did so on 27 June 2016, immediately following the constitution of the Commission. Annex V to the Convention provides that “[a] disagreement as to whether a conciliation commission acting under this section has competence shall be decided by the commission.” From 29 to 31 August 2016, the Commission convened a Hearing on Competence at the Peace Palace, the headquarters of the PCA in The Hague, the Netherlands. In its Decision of 19 September 2016, the Commission considered and decided on the objections raised by Australia.

First, Article 281 of the Convention provides that a dispute may not be submitted to compulsory settlement where the parties have agreed on another means of settlement and that agreement excludes further procedures. Australia contended that the Parties had agreed, through an exchange of letters in 2003 to resolve their dispute over maritime boundaries through negotiation. According to Australia, CMATS then supplemented the exchange of letters with an agreement to exclude further procedures.

Finally, the Commission interpreted Annex V to the Convention and concluded that the one-year time frame for the conciliation process should run from the date of the Decision on Competence.

Next Steps
The Commission will proceed to hold consultations with the Parties on the future conduct of the conciliation and intends to convene a series of meetings with the Parties over the course of the next year. The Commission anticipates that future meetings will be conducted largely in a confidential setting in order to provide an environment conducive to facilitating the eventual success of the conciliation.

Background on the Conciliation Process
The Commission was constituted on constituted on 25 June 2016 pursuant to the procedure set out in Annex V of the Convention. The five-member Commission is chaired by H.E. Ambassador Peter Taksøe-Jensen (Denmark). The other members of the Commission are Dr. Rosalie Balkin (Australia), Judge Abdul G. Koroma (Sierra Leone), Professor Donald McRae (Canada and New Zealand), and Judge Rüdiger Wolfrum (Germany). With the agreement of the Parties, the Permanent Court of Arbitration acts as Registry in the proceedings.

These conciliation proceedings were initiated by Timor-Leste on 11 April 2016 by way of a “Notification Instituting Conciliation under Section 2 of Annex V of UNCLOS” addressed to Australia.

On 2 May 2016, Australia submitted “Australia’s Response to the Notice of Conciliation”.

On 28 July 2016, the Conciliation Commission held a procedural meeting with the Parties at the Peace Palace in The Hague, the Netherlands.

On 12 and 25 August 2016, the Parties provided the Commission with written submissions on the question of the Commission’s competence.

On 29, 30, and 31 August, the Commission convened the Opening Session of the Conciliation and a Hearing on Competence at the Peace Palace in The Hague, the Netherlands.

On 31 August 2016 and on 9 and 13 September 2016, the Parties provided the Commission with supplemental written answers to questions posed by the Commission during the hearing.

Further information about the case may be found at www.pcacases.com/web/view/132, including the full text of the Commission’s Decision on Competence, earlier Press Releases, a video recording and transcript of the Opening Session, and the presentations of the Parties.

Background on the Permanent Court of Arbitration
The Permanent Court of Arbitration is an intergovernmental organization established by the 1899 Hague Convention on the Pacific Settlement of International Disputes. The PCA has 121 Member States. Headquartered at the Peace Palace in The Hague, the Netherlands, the PCA facilitates arbitration, conciliation, fact-finding, and other dispute resolution proceedings among various combinations of States, State entities, intergovernmental organizations, and private parties. The PCA’s International Bureau is currently administering 8 interstate disputes, 75 investor-State arbitrations, and 34 cases arising under contracts involving a State or other public entity. More information about the PCA can be found at www.pca-cpa.org.

REPRESENTATIVES OF THE PARTIES

AGENT
H.E. Hermenegildo Pereira
Minister of State and of the Presidency of the
Council of Ministers

H.E. Abel Guterres
Ambassador to the Commonwealth of Australia

H.E. Brett Mason
Ambassador to the Kingdom of the Netherlands