Skip to content
Hasegawa: “Prime Minister Shinzo Abe and President Barack Obama have achieved reconciliation by demonstrating their magnanimity and finding more value in recognizing truth than pursing justice. Hopefully the leaders of Japan and its neighboring countries will succeed in making similar achievements.“
(Source: www.aol.com)

At his lecture given at the International House of Japan in Tokyo on 26 January 2012, Professor Sukehiro Hasegawa, former Special Representative of the Secretary-General of the United Nations analyzed the relationship among Truth (真実), Justice (正義), Reconciliation (和解) and Peace (平和) and emphasized the importance of leadership in achieving reconciliation.

By acknowledging that Japan had fought two wars during WWII: one against the United States and its allies, and another one against Japan`s neighboring countries, Professor Hasegawa commended Prime Minister Shinzo Abe for having achieved full reconciliation and the relationship of mutual trust between Japan and the United States and expressed his confidence that the Prime Minister will succeed in achieving reconciliation between Japan and its neighboring countries.

The following diagrams were presented by Professor Sukedhiro Hasegawa duringhis lecture four years ago about the relationship amongtruth, justice, reconciliation and peace 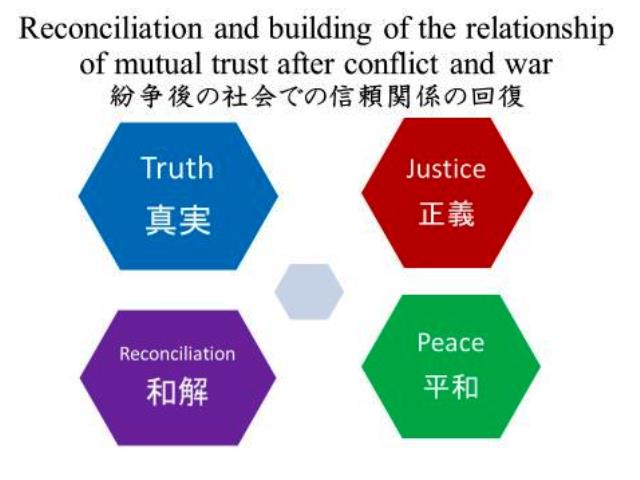 President Barack Obama’s visit to Hiroshima and Prime Minister Shinzo Abe`s visit to Pearl Harbor informed the world that both leaders of the two countries recognized what happened at the beginning and end of the Pacific War and showed magnanimity. It is hoped that the leaders of Japan and neighboring Asian countries demonstrate similar magnanimity.

Please see also the past announcement on Professor Hasegawa’s lecture at the International House of Japan delivered on January 26, 2012.