Professor Ishizuka presented his findings and views on UN peacekeeping operations, while Professor Yonekama discussed the manipulation of refugees and Professor Kihara-Hunt the role of UN police in protection of civilians. 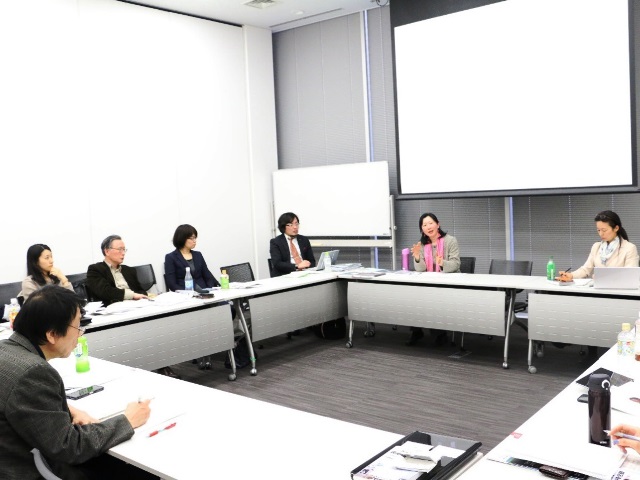 Director and Secretary-General of the Global Peacebuilding Association of Japan Katsumi Ishizuka is professor in the Department of International Business Management at Kyoei University, Japan. He got a PhD at Keele University, England, in 2000. His research interests include UN peacekeeping operations and peace-building. He wrote several books including The History of Peace-building in East Timor (New Delhi: Cambridge University Press India, 2010). Please click here for more details about her professional experience, academic training, publications and recent activities.

The first session was moderated by Professor Kurosawa who invited participants to comment and/or ask questions. Professor Yoshitaka Hanada of the National Defense Academy referred to the generations of UN peacekeeping and asked in what direction UN peacekeeping would change in the future. Somalia missions were considered to be the third generation peacekeeping, and more complex ones after Somalia are sometimes called the fourth generation. Professor Kurosawa asked about the categorization of UNAMIR mission. Prof. Ishizuka replied that UNAMIR is regarded as a mission that should have used force but did not do so. Mr. Ken Inoue, Senior Adviser of JICA asked whether UN peacekeeping would be involved in institution-building for global governance in the future.

Professor Sukehiro Hasegawa noted the importance of identifying and analyzing the “motive” of the partners and stake holders of UN peace operations. In conflict resolution, there is a need to address not only the root causes of conflict in war-torn countries and areas but also the motives of outsiders who are involved in peace operations for their own reasons.

15:50-16:00 Intermission
16:30-17:40 Session II ”Protection of Civilians and the Responsibility of the International Community“
(1) Refugees Manipulated by Governments, the UNs, and NGOs

Professor Yonekawa introduced her newly published book and explained how refugees have been manipulated by government, UN agencies and non-government organizations. A lively discussion followed among the participants.

At the end of the session, Sukehiro Hasegawa, thanked Professor Yonekawa for introducing her new book and highlighting the main points made in the book. He agreed that most of the practitioners of peacebuilding and humanitarian workers of the UN agencies and NGO staff are not well aware of the contextual forces at work in war-torn areas and the implications of what they are doing. Japan should play an active role in filling this need for raising the awareness of aid workers.

(2) The Role of United Nations Police in Protection of Civilians

In her presentation, Professor Kihara-Hunt introduced her book, Holding UNPOL to Account: Individual Criminal Accountability of United Nations Police Personnel and argued that the lack of prosecution of crimes committed by UN police personnel could not be explained by legal obstacles, namely lack of jurisdiction and immunity accorded to UN police personnel.

On protection of civilians (POC), she noted that, since the UN initiated response to mass killing, the POC had become the center of what UN peace operations delivers and become the raison d’être for a few recent missions. She then explored the role of the UN police in POC and argued that their central role should be supported institutionally and operationally.

The presentation was in three parts: (1) the birth and development of POC, (2) the development of the role of the UN police, and (3) challenges and suggestions for better delivery of POC.

1) The POC concept was born as the UN’s response to mass killings of civilians. The key is, and remains to be, protecting civilians ‘under imminent threat of physical violence’. The content has become more specific. Some recent mandates identify specific groups for protection. Earlier mandates included POC as a part, and some more recent ones have POC as their objectives. POC has shifted from an authority to use force to the duty to protect at two levels: at the level of peacekeepers and that of the mission. The UN considers its POC mandates in three tiers and four phases, taking a holistic approach with its focus on the community in the host State.

2) UN police is the fastest growing component of UN Peace Operations. Having started in the 1960s as a 30-member team under the military command, it has grown in number to around 13,000 and has been long recognized as an independent existence. Its functions have shifted from monitoring to capacity building and institution building. They are required to deliver more and more complex tasks. There are two types of UN police: Individual Police Officers (IPOs, including Specialized Police Teams – SPTs), who are seconded by contributing countries and deployed individually; and Formed Police Units (FPUs), who are seconded as units of 120-140 police officers. FPUs are deployed for specific tasks, operating in high-risk environments and/or requiring coherent response. Currently about 70 percent of UN police are FPUs. UN police have gained importance in UN Peace Operations, to the extent that they not only deliver core functions, but also the effective delivery of their functions is linked to the missions’ exit strategies. UN police’ strength, in particular that of IPOs, is their interaction with the communities that they serve for, and information that are based on that posture. Despite this, UN police are yet to be fully integrated into the UN’s planning, strategies, operations and analysis, and struggle to deliver their functions efficiently. They suffer from insufficient and inadequate supply of human and other resources. UN Police are currently under reform. An external review suggested that their functions be considered in two different types: protection and development and that appropriate human resource be provided for those functions.

3) POC is a mandate that contains the biggest gap between what is expected and what is delivered, according to the High Panel on UN Peace Operations. In particular, the role of the UN police is most unclear according to a study by the UN Department of Peacekeeping Operations (DPKO) and the Office for the Coordination of Humanitarian Affairs (OCHA). The community-centered approach of the POC matches the strength of the UN police. It is suggested that the UN police play the central role in the delivery of the POC. For that, it is essential that the structure of command be clarified, POC operations to be civilian-led in principle, and the UN police to be fully involved POC planning, strategies, analysis and evaluation.

Subsequent discussion addressed the issues of the UN police’ proximity to the receiving community, the type of information that UN police gather, and features of Formed Police Units.

Former Ambassador to Timor-Leste and Professor Yoshitaka Hanada of the National Defense Academy questioned whether resorting to UN police in high-risk situations with spoilers posing serious danger is appropriate. Mr. Ken Inoue of Japan International Cooperation Agency (JICA) commented that whether the UN use FPU and military in high-risk situations may depend on the available strengths of FPU and military. There are military liaison officers (MLOs), who also gather information from the community. The presenter answered that there are phases in POC, and that clearly there are situations where only military can provide physical protection. The important thing is who make decisions. She noted that indeed military gather information, and that it is important that information collected is effectively used by decision makers.

Other questions included the selection criteria for FPUs, the difference between information gathered by military and that collected by the UN police, and the meaning of the word ‘community’. Professor Kihara-Hunt answered that some selection criteria for FPUs have been relaxed, such as the requirement to speak the mission language, but they are trained in responding to high-risk situations. She opined that information gathered by the UN police is different from that collected by military, because of the different modes of operation of these two actors. The key is that police go further into the local community, and therefore they are in principle more suitable to respond to the needs of the community. The word ‘community’ does not mean that there is a single group in the host State that represents the interests of the whole population. The reality is far from it. There are many interest groups, their interest often conflicting with each other’s. In that sense, in UN’s operations, ‘community’ is a concept that involves many different groups of local people.

The moderator, Sukehiro Hasegawa, thanked Professor Kihara-Hunt for her presentation and those participants who made valuable comments and questions. Professor Hasegawa found the importance of the role of the UN police in strengthening the institutional and personal capacity of national and community police in countries in which the UN police forces are deployed. He suggested that Japan should establish a UN policy academy to develop UN police doctrine, code of conduct and train future UN police officers.

17:40-17:50 Announcement from the Secretariat (Masakuni Tanimoto)

Mr. Masakuni Tanimoto, Deputy-Secretary-General of GPAJ, announced that the next seminar meeting would be held on June 10 with Deputy Director-General Shigeki Takizaki of the Ministry of Foreign Affairs. He will address the issues concerning the Rohingya, Myanmar, and another country possibly Cambodia. He also mentioned that Professor Kurosawa will coordinate the preparation for the first GPAJ annual meeting for presentations and discussion of research papers on Saturday, November 25, 2017.