Hamdi Loza delivers the Foreign Minister`s speech at the 2nd Meeting of the International Advisory Board of The Cairo Center for Conflict Resolution and Peacekeeping in Africa (CCCPA). 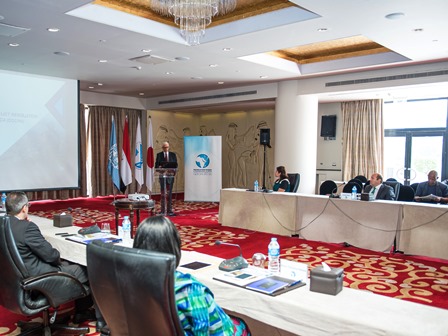 Opening Remarks Delivered by H.E. Hamdi LozaOn behalf of H.E. Sameh ShoukryMinister of Foreign Affairs of the Arab Republic of Egypt
To the 2nd Meeting of the International Advisory Board ofThe Cairo Center for Conflict Resolution and Peacekeeping in Africa (CCCPA)(As prepared for delivery)
10 April 2017, Cairo, Egypt

Allow me to welcome you in Egypt and to thank you for accepting our invitation to join the International Advisory Board of the Cairo Center; a flagship of Egypt’s contribution and commitment to international peace and security; particularly in Africa and the Arab world.
I would like to thank each and every one of you for taking the time of your busy schedules, to join us today for the second meeting of the Board.

We gather today at a time of great uncertainty and remarkable peril, both internationally and regionally, in a country that has always extended its hand to its brothers in our many shared struggles; from the struggle for independence to the pursuit of the legitimate demands of our youthful and growing populations for peace, security, prosperity and unity.
From the scourge of terrorism that keeps raising its ugly head all over the globe; and as we just witnessed yesterday in two Coptic churches in Tanta and Alexandria to the carnage of conflicts that continue to claim lives and shatter livelihoods; to the mass movement of people – both voluntary and involuntary – on a scale that we have not seen since World War II; we are – I believe – at a historical turning point.

Enormous changes are taking place globally. On one hand, we are watching a backlash against globalization and what seems like a return to nationalism and populism. On the other hand, we are following with great alarm, the rise of identity-based politics, giving rise to zero-sum conflicts that do not lend themselves to our traditional toolbox of conflict resolution and peacemaking. Moreover and maybe as a result, we are observing what seems like the beginning of a wave of global disengagement and/or fatigue from supporting local and regional efforts for peace, security and stability.

Peacekeeping operations are being reviewed and drawn down at the most inopportune of times. External support to African Peace and Security efforts is declining. And the international fight against terrorism is at best selective. 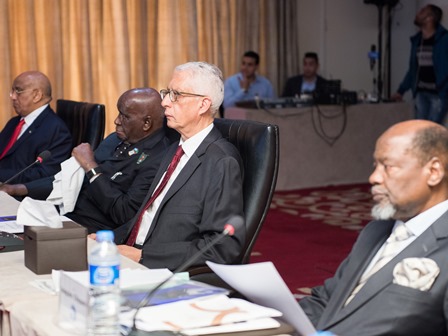 In the face of all these challenges, Egypt finds itself obliged to shoulder more responsibilities for international peace and security, especially in Africa and the Arab World.
As the only Arab member and one of three African members of the United Nations Security Council, Egypt is exerting its utmost efforts to advance the interests and voices of its continent and region.

In the Arab region, we continue to work with like-minded partners, saving no effort to advance peace and security to put an end to the suffering of millions in Libya, Yemen, and Syria.

On a broader front, we continue to lead the global fight against radicalization and extremism leading to terrorism, including by engaging in the ideological struggle against those who misrepresent religion and implicate it in conflict.
In all our efforts, we have been guided by basic principles, of which I would like to highlight the following:

First is the primacy of politics over military solutions. This is, as you all know, a long term tradition of Egyptian foreign policy, one whose eternal validity is confirmed daily.

Time and time again, we have seen that “conflict management” approaches only lead to freezing conflicts, not resolving them. We have also repeatedly seen that the militarization of peace interventions – including peacekeeping – does very little to address the root causes of conflict and never lead to sustainable peace.

It is therefore Egypt’s position that only through peaceful and inclusive methods of conflict resolution, not management, which is grounded in the local specificity of the context, that we stand any chance to achieving peace that is sustainable.

Second, and related to the above, is our strong belief in the need for a continuum of peace interventions, and sustaining regional and international support before, during and after conflict erupts.

Third, is our unshakable belief in national ownership and respect for sovereignty. Peace cannot be imposed, especially from outside. Rather, it must be gradually built from the ground up, through a process of engaging national stakeholders in peacemaking, peacekeeping, and peacebuilding and efforts of grass roots sustaining peace.

In its pursuit of international peace and security, Egypt has been deploying a variety of tools, from its deployment of peacekeepers, to its proactive diplomacy in international and regional for a, as well as bilaterally.

Among these tools, the Cairo Center for Conflict Resolution and Peacekeeping in Africa plays a unique role.

Established in 1994, CCCPA is an African Union Center of Excellence in training and capacity building. It is the only civilian Arab training center on issues of peace and security.
For more than two decades, the Center has been at the forefront of African efforts to build capacities on a wide array of topics, ranging from peacekeeping to combating human trafficking and smuggling of migrants; training in the process thousands of military, police and civilian professionals.

During the last few years in particular, the Cairo Center has developed an international reputation of excellence. It is today the first African and Arab center to assume the secretariat of the International Association of Peacekeeping Training Centers. In addition to working closely with the African Union and the League of Arab States, the Cairo Center has expanded its web of global partnerships, including with the United Nations.

Moreover, and in addition to its training activities, the Center has played an important role in convening regional and continental discussions on issues of global peace and security, including the peacebuilding and peacekeeping global reviews that took place in 2015, and hosting the African Union Retreat for Mediators and Peace envoys in 2010, 2011, 2012, and again in 2016.

It is for this reason, that we have concluded that the time has come to establish this International Advisory Board, and to invite this distinguished group of African leaders and international figures to join it.

The objective of the Advisory Board is to provide strategic counsel to the management of the center on dealing with current and future threats, challenges and risks to peace and security, in Africa and beyond.

We look forward to your very fruitful discussions today, and for your guidance and advice on Center’s strategic direction.