Hasegawa: More than 43 people killed in bombings in Coptic churches in the Nile Delta towns of Tanta and Alexandria, Egypt, showing that humanity has not learned from its historical insight. Please check below for his full reflection. 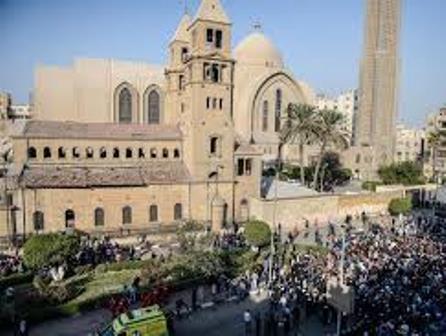 I arrived in Cairo shortly after 1:00 p.m. today, or Sunday, April 9, 2017 to attend the annual meeting of the International Advisory Board of the Cairo Center for Conflict Resolution and Peacebuilding in Africa (CCCPA). This year, there will be six other participants: former President Kenneth Kaunda of Zambia, President Joaquim Chissano of Mozambique, Prime Minister of Djibouti Dileita Mohamed Dileita, Secretary-General of the League of Arab States Amre Moussa, ILO Deputy Director General Mary Chinery-Hesse, and Assistant Minister of Foreign Affairs of Egypt Hesham Badr. The topic of this year`s discussion is “Charting Our Path to Peace, Security and Prosperity in Africa and the Arab World.”

Upon arrival at the Sofitel Hotel, I learned about the bombings that had just taken place, killing at least 43 at two Coptic churches in Tanta and Alexandria, Egypt. It`s special Palm Sunday when Christians, I understand, use palm crosses to mark the moment Jesus entered Jerusalem before his death and resurrection. ISIS claimed the responsibility immediately. President Sisi declared a state of emergency for three months. He called an emergency meeting of the National Defense Council and also announced the establishment of a supreme council to confront extremist acts in Egypt. The United States Department issued a statement, calling the bombings as barbaric attacks on Christian places of worship and the United States will continue to support Egypt’s security and stability in its efforts to defeat terrorism.

I asked a few people including the staff of host institution, CCCPA, what they thought about the bombings. They said that they had expected some things similar to happen and linked to the attacks came a few days after President Abdel Sisi`s meeting with President Trump at the White House.

This reminded me of the burning of houses in East Timor in 2006 when the then President of the country told people that lorosa`e and loromonu were different. It also reminded me of Hutu people in Rwanda who went on to kill hundreds of thousands of Tutsis simply their leaders told them to do so. Well, does this mean we can go on to find peace only in the graveyard as Immanuel Kant once said?

Alternatively, as Kissinger said, let us try to gain an insight into what we can and should do to achieve perpetual peace on earth and not in the graveyard.

In his1795 essay, “Perpetual Peace: A Philosophical Sketch,” Kant presented his idea of “Perpetual Peace” in two parts. The first part consisted of the steps that should be put into immediate effect such as the abolition of standing armies and the dominion of any independent states, large or small, by another state by inheritance, exchange, purchase, or donation. He also stipulated that no state shall by force interfere with the constitution or government of another state. Kant then suggested that the law of nations shall be founded on a federation of free states. Kant’s essay in some ways resembles modern democratic peace theory, though it also differs significantly from it. He speaks of republican states which he defines to have representative governments. Most importantly, he did not regard republican governments as sufficient by themselves and envisaged a league of nations to achieve peace.

The Kantian idea of peace took more than two centuries to develop as the League of Nations was first founded in 1917 only to fail with the advent of World War II and the United Nations established in 1945 to bring about peace and stability.

The recent move back to nationalism shows that the humanity has not learned enough lessons from its history. If we ignore this historical insight, national rivalry and religious confrontation will result in perpetual conflict and war instead of peace…