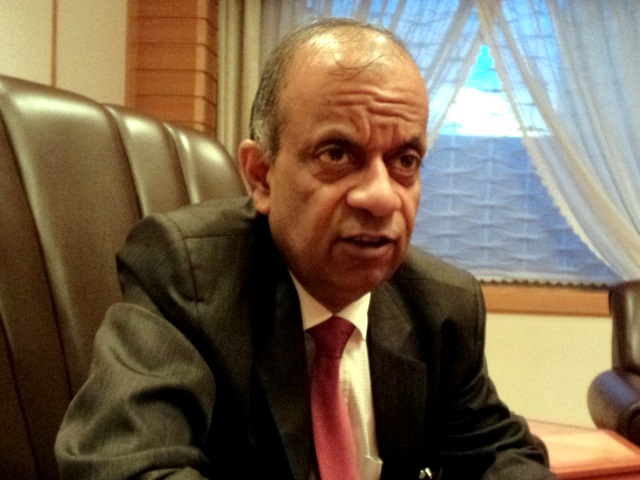 Through his career over thirty years, Mr Khare found that the UN cannot replace countries, and should rather find mechanisms that can be accepted by countries. The following is a gist of views expressed by Mr. Khare in response to questions raised by Ms. Yumiko Kaneko, member of the Global Peacebuilding Association of Japan.

Atul Khare (AK):
In my view, the important thing is how to resolve and build on the difference in opinions held about resilient community and non-resilient community. If the difference of opinions in based on dialectical thinking and approach to analysis, reduction, proposition, counterproposition, we will then arrive at a new proposition that follows in the same process of new proposition, counterproposition… and then you can develop eventually a society that can be stable and peaceful. But on the other hand, if we adhere to our own opinion and remain dogmatic, we may start fighting with each other and end up in conflict and crisis situation, instead of developing proper logic and direction with mutual respect for each other’s opinion, even though they may be different from ours.

Another view of resolving the difference of opinions is to the court which represents a legal approach designed to find legal solutions to disputes. But, if the courts are not functional, or if the justice is being delayed in issuing its opinion for many years, then, the court loses its usefulness and may not be an appropriate structural mechanism to resolve anything if they cannot decide on legal issues for as long as twenty years. You know, justice delayed and justice denied. The same thing can be said about parliament. If ninety-nine percent of seats in parliament belong to one political party, then the parliament cannot function as a mechanism for resolving the difference of opinions.

Another mechanism is the media. Very strong media, you know, newspapers, TV, radio, these can be effective means for sharing divergent views and resolving the difference of opinions. But instead of resolving the difference of opinions, if media is used to spread hate among one group against another as it happened in Rwanda, then you have a problem. Then, it is not a mechanism for contributing to resilient societies.

YK:
In that situation, how does the UN contribute to creating the mechanisms of resilience or resolving the differences of opinions and creasing a stable and peaceful community?

AK:
I think that is very important question because the UN can assist the community but cannot replace the community in existence. The communities have to be willing to find a new non-violent way of resolving their differences. Once they find a non-violent way, then the UN can assist. You know, when Professor Hasegawa was a chief in Timor-Leste, we recruited a group of nearly three-hundred experts. They were called a civilian’s support group. We sent the UN people to work inside the government ministries of Timor-Leste, a group two people in pair or five people depending upon the ministry responsible for civilian affairs, economy, finance, and so on and so forth, and I think it was very successful. But, ultimately, it is for the country to decide and take the responsibility of peace and nation building. We cannot replace the country and do peace and nation building for them. That is not possible.

YK:
For the United Nations, what is the most difficult challenge for peacebuilding?

AK:
I think the most difficult challenge is creating the respect for the rule of law. This is the most difficult challenge because we cannot substitute the country as I said. It takes a long time to develop the rule of law, you know, for example, to train lawyers. After schooling, it takes at least, seven years consisting of four years for the first degrees and then the three years for law degrees. But then, lawyers need lots of experiences as prosecutors, defence lawyers, before they can become a judge. So, you add another ten years. Seven years to become a lawyer. Ten years to become a judge. Seventeen years. Then become a good judge, another five years, twenty-two years. So, that is the minimum time required for development of the good rule of law system. But countries are not willing to wait for that long. So, we need to find other mechanisms. Other mechanisms mean, for example, now there are many countries which have agreed that the highest court of law will not be within their own countries, but can be outside. One of the example is Mauritius. Mauritius accepts as a final supreme court, because you are now learning in Nottingham, so they accept the Queen as the final decider. That is not a bad idea because for small countries, you know Tuvalu, until small countries with fifteen thousand people. How would you have district courts, high courts, and a supreme court? So, I think you need to be conscious of what is that community can afford; and according to that, we should make a principled approach and provide advisory services. In my view, we should also be careful not to demand that every country should have district courts, high courts and a supreme court, just because we have them in our countries. No, we should not be too demanding. Depending on the size of a country, maybe they need only two levels of courts. Maybe they can have only one court. In other words, it is my view that what is possible for a developed large country like Japan may be impossible for a small country like Timor-Leste to have multilayers of courts. It is adequate for Timor-Leste to only two courts: district courts and court of appeals.

YK:
In that respect, I think there are some criticisms about peacebuilding in Asia that the UN tends to insist on Western standards in institution-building. What is your views?

AK:
I think it’s not exactly like that. I will not say Western standards because in some places, for example human rights, they are not Western standards, they are actually international standards. They were accepted in the Vienna declaration and the programme of actions nearly twenty-five years ago. Then, they were retreated in the Human Rights Council as universal norms. So, I think we need to look at it like that.

But in some cases, yes. We need to look at what is cultural respect; we call it cultural respect. For example, let’s say agriculture. Now agriculture in the United States and Europe, we may have a policy of mechanised agriculture; tractors, threshers, everything is by motors, by mechanised means. But in Timor-Lest, there is no road. It is a mountainous country. In the mountain, how you can use a tractor? You cannot take up tractors to mountain tops. It’s not possible. So, I think we need to have some common sense. Tractors may be very good in flat countries but may not be good in the countries with mountainous. So, that is how we need to look at this.

YK:
So, your advice is to look at specific situations that a country has.

YK:
I know I have already taken more time allowed me, but may I ask the one final question? What do you think about the contributions Japan can make peacebuilding?

AK:
In effect, Japan, to my department, is doing the capacity building of African countries for deployment and peacekeeping. I will send you some photographs by email of our projects that supported by Japan. They show Japan is making very important contributions in building the capacity of peacekeepers in deploying themselves and increasing their mobility. Sorry, I do not have time to explain but will send you photos of what Japan is helping other countries that are much appreciated.