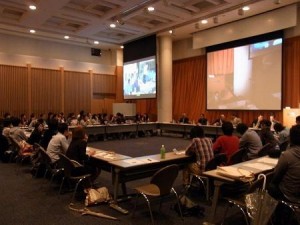 The first video conference was held on Tuesday, 11 May 2010, between students of Hosei University and the University of Timor-Leste on the topic of “Our democracy – Comparison betweenTimorese Semi-Presidential system and Japanese Parliamentary system.” There are more than 70 students from Hosei University and 50 students from the University of Timor-Leste. The conference was opened by President Masuda and Vice Rector of the University of Timor-Leste on behalf of Rector Benyamin de Araujo Cortereal. Mr. Gerard M. Gallucci, Chief of Staff UNMIT also made an opening speech. Special Representative of the Secretary-General Ameerah Haq and Deputy SRSG Finn Reske-Nielsen spoke briefly. Vice President Tokuyasu and Professor Suzuki also participated in the conference. Mr. Martinho Pereira, Dean of Political Science Faculty made an introductory speech while Mr. Yuji Suzuki introduced Japanese students.Mr. Ken Inoue and Mr. Kisho Tsuchiya acted as masters of ceremony. The discussion session was moderated by Mr. Martinho Pereira, Dean of Political Science Faculty University of Timor-Leste and Professor Hasegawa.
Mutsumi Abiko
Is it true that foreign policies are conducted by prime minister and the president, since there are not many well trained diplomats?

Ryosuke Ohyama
The approval rating for the Government and the Prime Minister of Japan seems very low as we can see the lack of interest and support toward political parties among the young generation. From the perspective of university students, do you assess what your government does in Timor-Leste?

Yuki Yamazaki
In Japan, the Emperor is the symbol of the State and of the unity of the people.
But, he doesn’t have any political power.
On the other hand, the President of Timor-Leste is also symbol of the state as written in the constitution, but he exercise much influence actively the State politics including the legislative, administrative and judicial matters.
My question is that how much influence does the President exert on the politics as a head of the State?

Sune Jun Misu
“The problem that is coming up is the lack of unity among the ministers of the coalition government. Their opinions are not same. So it is not going well”

Aoi Yokoda
The big problem of Japanese government is that there are many different opinions among the parties of coalition government and also there is a lot of confusion which is creating a big problem like an example of Futenma issue.

Kotaro Takahashi
Thank you for your presentation.
I have two questions. First of all, from the point of occupation, do many people in Timor-Leste want to be members the National Parliament? I ask this question, because if so, I think that the politics in your country is working well enough. And my second question is about the civilian control which is one of the most important issues when you are forming politics. Does civilian control work well in Timor-Leste?