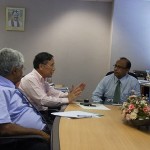 On September 1, Professor Sukehiro Hasegawa along with Professor Amal Jayawardane, Executive Director of the Regional Centre for Strategic Studies and ten students from Hosei University visited the Office of the Presidential Task Force for Resettlement, Development and Seucrity in the Northern Province of Sri Lanka. Secretary S.B. Divaratne briefed Professor Hasegawa and his students about the steps the Government has taken to return internally displaced persons, most of whom are Tamil people, and resettle them with the assisance of UN agencies such as UNDP, UNHICR, UNICEF and also IOM. Mr. Divaratne praised the UN agencies for having supported effectively the Government`s in resettlement and recovery efforts. (Yusuke Noda)