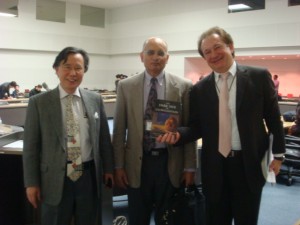 At the UNU Interactive Seminar on Global Issues, Professor Ramesh Thakur of the University of Waterloo introduced a new book entitled The Dark Side of Globalization published by the United Nations University Press. Professor Sukehiro Hasegawa participated in the book review meeting as discussant. Introduction was made by Mr. Vesselin Popovski, the Senior Academic Programme Officer of UNU.
Professor Ramesh Thakur started his presentation by introducing the characteristics of globalization. Globalization has brought many benefits including reduction of poverty in several countries, though it also has a dark side. Globalization has brought western standards such as consumerism and culture of investment into global level, which generates winners and losers clearer in the international level and the domestic level, too. For example, if a country cannot find a golden rule that leads them to the way on to industrialization such as Singapore and Chile could, they will not be helped but being a loser in the time of globalization. And there are many farmers in India who are killing themselves since the severe competition in the global market. Globalism also has a nature of imperialism. While developed countries assist developing countries in industrializing, developed countries get illegal money from developing countries through the backdoor which is ten times of their aid. Globalisation has made capital and technology to flow freely over national boundaries and created much wealth, but it has also unleashed the negative forces, for instance transnational flows of terrorism, drug and human trafficking, organized crime, money laundering, and global pandemics. Weapons used in a civil war will be recycled and exported to another war. Professor Thakur said that although globalization has a dark side, what is important is how we respond to it. To solve big and broad problems such as global warming, strengthening of global governance is strongly needed. Single country cannot sort those problems out in the time of globalization. Finally, he said that we have to accelerate our effort to achieve MDGs and we also have to start thinking about the post-MDGs.
After Professor Thakur`s introduction of the book, Professor Hasegawa made several points. First, globalisation has also shrunken time required for action. Secondly, globalization posed a challenge for the leaders of democratic system which takes long time to decide. Thirdly, political leaders are increasingly required to respect democratic principles and values. Fourthly, free trade made global economy more efficient and made it possible for US, Europe and Japan to have only 1 to 2 percent of their population engaged in agriculture. As a result, a large number of people have become unemployed even in emerging countries like China and Brazil. Structural unemployment requires the transformation of economy. In the Q&A session, Professor Thakur explained the impact of social networking, which played a very important role in the demonstration held in Iran. (Jun Sune Misu)