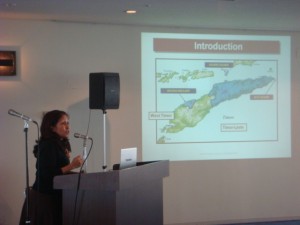 The seminar started with opening remarks by Mr. Motohiro Oono, Member of the House of Councilors, the Diet of Japan, and Director-General Japan-Timor-Leste Parliamentary League. Mr. Oono welcomed Minister Emilia Pires to Japan on behalf of all members of the Japanese Diet, and emphasized the value of this seminar to share the steady progresses on institution building and economy under the leadership of President Jose Ramos Horta, Prime Minister Xanana Gusmao and Minister Ms. Emilia Pires. He praised Timor-Leste for having achieved a smooth transition into new phase of self-reliant national development. He also mentioned the significance of “G-7 Plus”, a forum launched by Timor-Leste to share experiences of countries emerging from conflict and the special session of the United Nations Security Council on the issues of institution building in post-conflict countries held in January of this year which the Vice Prime Minister of Timor-Leste José Luís Guterres participated as one of the main speakers.
Ms. Emilia Pires delivered her presentation entitled “Timor-Leste’s Journey to Sustain Peace and Development”. First, she made an overview of the developments in Timor-Leste since the Popular Consultations held in 1999. She explained the relationship between investment, peace and growth using a graph which shows amount of investment of each year and time when the conflicts occurred. Secondly, she showed the progress that had been made in Timor-Leste by sorting out and comparing the condition of Timor-Leste in 2006/7 and in 2010. She sorted out the condition in 2006/7 as emerging of 150,000 IDPs, rebel group in the mountains and petitioners, youth gangs, leadership crisis, rivalry between police and army, highly politicized publish service, corruption and centralized systems and compared it with one in 2010 which appeared with the states of peace and stability restored, IDPs returned, double digit economic growth, poverty reduced by 9%, improved social indicators, police and army working together. Finally, she explained the actions taken to restore and sustain peace and development. The transition of the priorities in the Strategic Development Plan of Timor-Leste was overviewed. (Public safety in 2008, food security and agriculture in 2009, roads and water in 2010, and infrastructure is prioritized on top for 2011) The extrication from dependence on oil income was raised for a key to sustain peace and development with the explanation of Petroleum Fund to stimulate non-oil economy. As a further illustration, the financing and future implementing Strategic Development Plan was also introduced. She concluded her presentation with the investment for the future. Electrifying the nation, investing in agriculture, fisheries and tourism, investing in the young generation, rebuilding health network system, reforming public finance management systems, are there as concrete subjects to be tackled to sustain peace and development in Timor-Leste.
Mr. Vesselin Popovski of the UN University moderated a discussion that followed Minister Emilia Pires` speech. Professors Yokota, Kunugi, Kuyama, Ishizuka, Nada and others made comments and asked questions. Professor Hasegawa made concluding remarks. (Hayato Takeuchi)