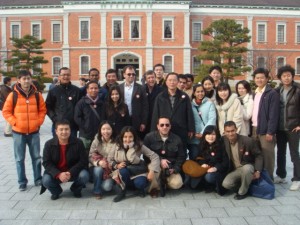 The port of Kure flourished as one of the major port cities in Asia, where the most powerful battleship YAMATO was built during the period of the Second World War. After the War, many super oil tankers have been built in Kure. Edajima, an island located in Hiroshima bay, was the site of the Imperial Japanese Academy from 1888 to 1945 and was regarded as one of the greatest naval academies, along with Annapolis for the US Navy and Dartmouth for the British Royal Navy. It now serves as the site for the Japanese Maritime Self-Defense Service School. The Hiroshima Peacebuilders Center arranged the visit for the trainees along with Professor Sukehiro Hasegawa of Hosei University.