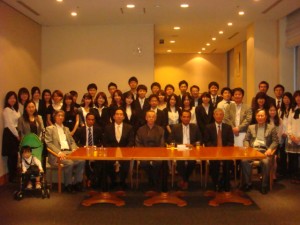 Mr. Isilio Antonio de Fatima Coelho da Silva Ambassador Plenipotentiary and Extraordinary, Democratic Republic of Timor-Leste indicated that Japan’s continuing assistance for peace and development to Timor-Leste had been working well. He said that the Timorese people wanted to strengthen the tie between Japan and Timor-Leste through more human interaction such as students. Finally, he expressed his hope that the students from Senshu, Waseda and Hosei Universities will have fruitful visits to Timor-Leste later this year.

As the end of this welcoming ceremony, we held a small reception with the invited quests including Ambassador Coelho who spoke with students. (Aimi Ezawa)