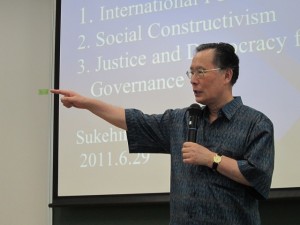 On 29 June 2011, Professor Hasegawa lectured on the “Social Constructivism” and “Justice and Democracy for Global Governance”.
Before he introduced Constructivism, he explained the four theories on international relations: classical realism, structural realism, classical liberalism and neo-liberalism. Constructivism is based on recognition of the important as well as universals and universal factors. The universal factors are Principles (which is universal), Values (which depends on your society or environment), Beliefs, Norms, Laws and Standards. According to the US Declaration of Independence, Life, Liberty and the pursuit of Happiness are certain UNALIENABLE Rights.
Professor Hasegawa also introduced the three theories of the justice for global governance: utilitarianism, libertarianism and the theory of justice. The “justice as fairness” is the most influential element in the theory of justice which is proposed by John Rawls. According to the “Perpetual Peace” by Immanuel Kant, if national sovereignty were left to the people rather than kings, there would be no war.
(Shogo Yoshida)