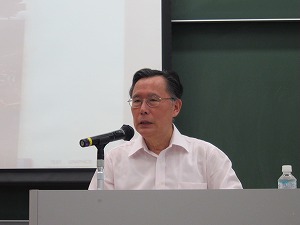 In a Lecture given on June 22, Professor. Hasegawa explained various“Theoretical Approaches on Global Governance of a Globalizing Economy”.
He had five points in the lecture. First he explained classical liberal economic theory. Second he highlighted key aspects of the post WW 1 economic theory. These are neo-liberal economic theory and its triumph following the collapse of the Soviet Union. Third he noted the significance of the Washington consensus which has ten contents. Forth he explained neo-Marxist view of the root causes of the current economic and financial problems. Finally he pointed out the prospect for better global economic governance with contrasting roles that can be played by G20 and United Nation.
(Sayuri Maruyama)