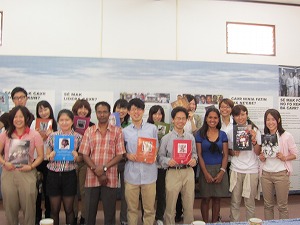 On Ausgust 29, We left the hotel at 9:30. First, we went to CAVR. A staff showed us three exhibition rooms about the history of Timor-leste, and the human rights. And a staff recommended us to enter “the dark shell”. In the dark shell, we could experience the atmosphere of the actual prison. After the quick tour, instead of the director, the chief librarian Mr. Aventino gave us the breifing. He explained why CAVR established, and what CAVR’s activities are, he also gave us CAVR’s final report as a gift. We had some chinese food for lunch, and we headed to JICA. Mr.Okumura gave us a lecture about their main project in Timor-Leste. Finally, we went to REDE FETO. She explained traditional role of women in Timor-Leste and recent situation of women which is . She said to make Timor-Leste better country, women’s role is important as well as men’s, and women and men should implement eachother. (Dona Jung)

CAVR
On 29th August, we visited the commission for Reception, Truth and Reconciliation in Timor-Leste Dili office. CAVR building is used to be a prison in Portugal and Indonesia occupation era.
First, we visited three exhibition room about history of the invasion of Timor-Leste, the role of CAVR, and the right of woman and children, we also got into the former prison rooms.
In the exhibition room, we studied the struggle against Indonesian occupation and international actors such as Portugal, U.S.A., Australia, Japan’s role towards Timor-Leste fights for independence.
The cheif librarian Mr. Aventino explained the role of CAVR mandate which is about community reconciliation, truth-seeking, victim support and publishing the final report called Chega!. They have dealt with the cases among Indonesian occupation era. For the truth-seeking, they have collect proofs and voices and find violations of law especially
human rights issues on children and woman. Also they have dealt with reconciliation between victims and criminals among towns in Timor-Leste. They explained this approach has been effective.
CAVR is publishing wide variety of hearing reports, Chega! and woman and the conflict, political imprisonment, internal political conflict 1974-1976 and so on. These series of books tell us the Timor-Leste history in their own words.
In the conclusion, we understand what happened among the struggle for its independence and how they felt it and treated by Indonesia.Variety of CAVR activities have been accepted by citizens and international organizations. To know and to tell the truth in the hard time had difficulties but also it leads reconciliation towards peace.
(Yusuke Noda)