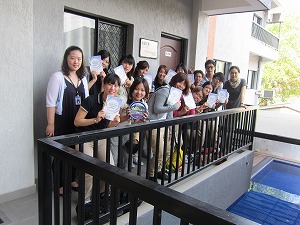 August 30 is the national referendum anniversary day, so people celebrated it, and Dili got excited. There were small festivals here and there in Dili.
After the lunch, we had KOICA’s briefing. They welcomed us very much and explained their education support activities in Timor-leste.
Finally we had question and discussion time, and Mrs. Jung said it is important to try to see a bigger picture when we travel Timor-leste. It was a worthwhile time. (Mai Nakasendo)

Today, we visited KOICA which is one of the donor in Timor-Leste. We met Kyu-Hee PARK who is the head of KOICA in Dili, and KOICA staff Sae-Lim who is doing internship in KOICA. We got precious stories about KOICA’s activities in Timor-Leste. There are huge problems of infrastructure in Timor-Leste, so it became a great challenge.
According to briefing of KOICA, they train people with Korean perspective. Especially, there are three major activities in Dili. Education, pure water and geological mapping.

“EDUCATION”
KOICA is mainly focusing on education, because of the poor level of developed skill labor of Timorese which is level 1, the lowest, and level 3 considered to be a manager. In Timor-leste, most of Level 3 people are Filipinos, Indonesians, Chinese, and some Cambodian. So Timorese are very hard to find a job. So, KOICA trying to do give some
training for young Timorese people, it is important because under the age of 20 is 60% of the population. In the primary education, the government of Timor-Leste put so much attention by using Portuguese. But most of the teachers can’t use textbook written in Portuguese. So KOICA is publishing textbook written in tetum language and delivering
all school, also building the national printing center. But when it comes to the technology or knowledge transfer on the job training (OJT), it is really hard because tetun is developing language. So KOICA provides additional education training in small infrastructure project.

“WATER SUPPLY and SOLOR ENERGY”
This project is to turn sea water into pure water and using the solar energy in DILI. The capacity of supply water is small in Timor-Leste. And the final goal of KOICA is give various skills to Timorese people and give them an opportunity to do their own business. At the end of the project, KOICA is expecting Timorese engineers could apply those techniques to other areas. The government of Timor-Leste provides power to small village areas around mountain by using solar power. But the main problem is battery.

“GEOLOGICAL MAPPING in SWAI”
Also, KOICA have geological mapping project because there are a lot of gas, petroleum near SWAI. It means this gas will help economic development in Timor-Leste. So economically SWAI is very important area, and KOICA contribute second pipe line. Also, KOICA give training course for Timorese geologist.

Lastly, the head of KOICA said “Minister of finance in Timor-Leste says that We have money. But we don’t know how to use it.”(Minsik Kim)