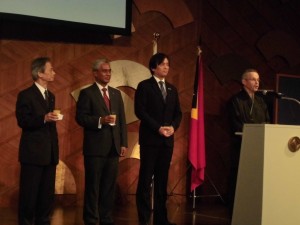 On 9th March 2012, Timorese Ambassador Coelho hosted a reception at the Hotel New Otani in Tokyo to celebrate the 10th anniversary of the restoration of independence of Timor-Leste and the 10th anniversary of the official establishment of the diplomatic relations between Timor-Leste and Japan.
Foreign Minister Zacarias Albano da Costa spoke about the stable situation in his country and the friendly relationship between Timor-Leste and Japan. He expressed his appreciation of support extended by Japan.
Mr. Joe Nakano, Parliamentary Vice-Minister for Foreign Affairs, thanked all Timorese people for giving aid to Japan when the earthquake occurred to Japan a year ago. The amount was large in relation to the size of Timorese population.
Mr. Satsuki Eda and Mr. Tsurunen Marutei, members of House of Councilor and former and current President of the Timor-Leste Japan Parliamentary Friendship League also spoke warmly Timor-Leste.
The reception was attended by more than 300 people including sixteen students of the Hasegawa seminar who had visited Timor-Leste participated in the celebration. Two of were dressed in Kimonos.
(Aimi Ezawa)