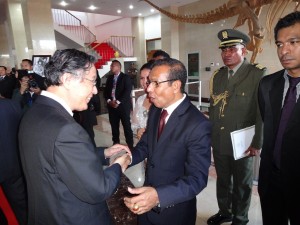 The tenth anniversary independence celebrations and the inauguration of new President Taur Matan Ruak in Timor-Leste held on 19and 20 May 2012. Former Special Representative of the Secretary-General, Professor Sukehiro Hasegawa of Hosei University, participated in the events and met with leaders of Timorese society and also United Nations officials.