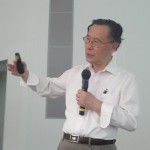 On 30th May 2012, Professor Hasegawa spoke on the international civil service system centered the United Nations common system. First, he explained how the international civil service emerged with the establishment of the League of Nations. The system was designed to enable international civil servants to maintain their highest standard, independence and impartiality. The Noblemaire Principle was established to provide the best working conditions and compensations to recruit most qualified personnel. Secondly, he explained the structure of United Nations secretariat consisting of the Secretary-General and his staff, including seven different kinds of contracts given to staff and personnel such as regular staff and technical cooperation personnel, etc. He noted dramatic increase in the ratio of women in staff composition as a result of gender equality policy adopted in the 1990’s. Finally, Professor Hasegawa talked about the recruitment criteria particularly competencies, academic qualification, professional expertise and proficiency in working languages. English has become the common language for use in most of the international organizations while French or Spanish is used as the second language.(Daiki Kawabe)