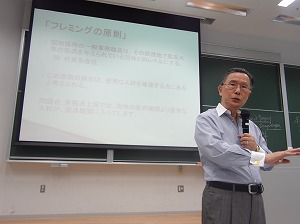 On 6th June 2012, Professor Hasegawa lectured on two principles that governed the conditions of international civil servants working in the UN common system. The Noblemaire Principle set a salary scale of UN staff based on the highest paid national civil service and that the US federal civil service had been used as the comparator civil service. The second principle called the Flemming Principle stipulated that local staff of the UN system should be paid “best prevailing local rates” and according to “best prevailing local conditions.” Professor Hasegawa then explained in details the salaries and allowances of the UN’s the terms of employment. The salaries consisted of basically professional and general service. Their levels are decided on the competence and experience. The amount of salary is adjusted on the location of staff assignment post. UN staff also benefitted from education, dependency and other grants as well as annual, sick, maternity and other leaves. Professor Hasegawa analyzed the implications of UN staff benefits and allowances in terms of wider doctrines such as liberal and social democracy. Finally, he asked the students about their views on the applications of the Noblemaire and Flemming principles, which the students found reasonable and attractive particularly for female workers. The students were then given five minutes to write down their views. (Yasuki Uchiyama)